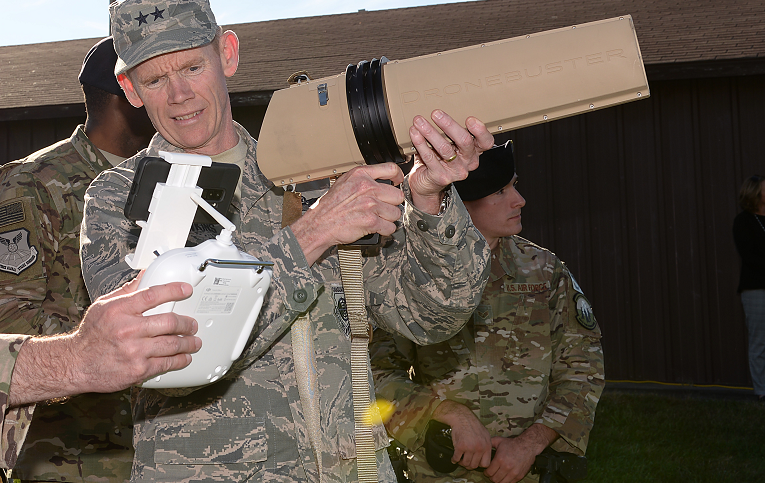 A Belarus-based company has announced the development of a mobile Counter Unmanned Aerial Vehicle jammer. The Groza-P2 C-UAV system, developed by KB Radar, will be showcased at the defense technology expo, Milex 2019, in Minsk this week.

The system is a portable, rifle shaped jammer that is intended to prevent access of small unauthorized UAVs into certain areas by locating and neutralising potential aerial threats. The Groza-P2 is designed to counter small UAVs and multirotor drones by blasting electromagnetic noise at the targets. It can jam radio frequencies communications, as well as disrupt satellite navigation signals, such as GPS.

The jammer only works in non public frequencies, meaning that it will not interfere with any manned aircraft or radio frequencies.

KB Radar mentions that the system does not need the assistance of a precise guidance system in order to acquire a target.

The jammer works when the operator aims the jammer at the UAV and with the help of the collimator the system radiates the UAV with electromagnetic noise. Given that the UAV is within operational range, this will force the UAV into an emergency landing.

Janes.com reports that the Groza-R system, the Groza-P2’s predecessor, can operate at a distance of up to 3 kilometers. The system comes equipped with a separate backpack that carries the battery and amplifier system, making the total weight of the Counter-UAV system is about 40 pounds.

The newer Groza, however, is much lighter than its predecessor, weighing in at 14 pounds. In order to achieve this lighter weight, KB Radar decreased the battery size and combined the system into a mono-block.