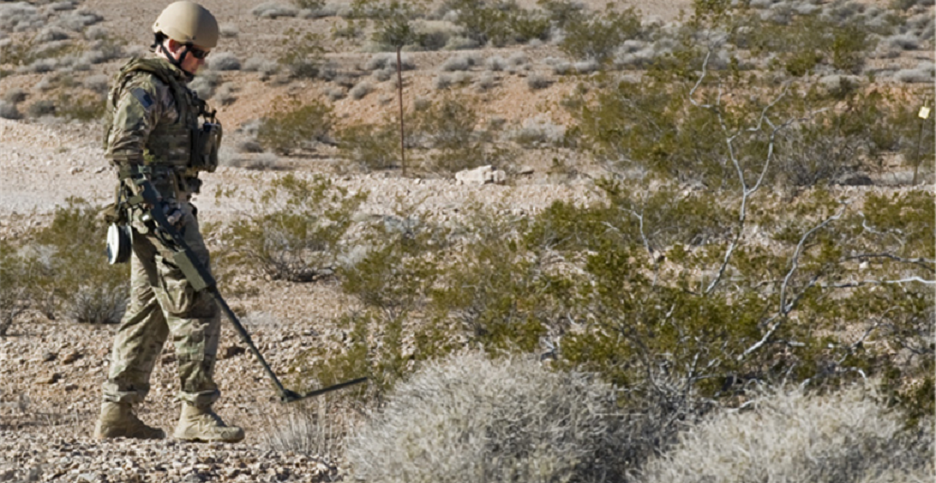 The presence of non-metallic unexploded ordnance on U. S. military ranges, including less conductive materials like carbon fiber in the ground, endanger the soldiers and can not be detected by current Department of Defense solutions.

Using his Massachusetts Institute of Technology doctorate background in electrical engineering, Barrowes suspected that finding targets with conductivity in between metal and soils should be possible. “Carbon fiber is more conducting than the ground but less conducting than metal. Thinking about what actually happens when we bring these frequencies close to metal, I realized that the electrons in less conducting targets needed to be pushed harder in order to respond like they do in metals, because it is difficult for electrons to move in less conducting targets, kind of like moving your hand through water as opposed to moving your hand through the air.

“The way to push electrons harder at these frequencies is to use a higher frequency, so that is the direction we went in, while maintaining the set of physical assumptions that we used in our models and our understanding,” Barrowes said, according to erdc.usace.army.mil.

Because carbon fiber is at least a thousand times less conducting than metal, Barrowes explained the need to develop a new sensor instrument that operates in the higher frequencies from 100 kHz up to 15 MHz.

The team was able to find less conductive targets associated with IEDs as well as voids in the soil which can indicate an ammonium nitrate IED, because they operate at higher frequencies than normal metal detectors.

“The current handheld IED detection system used by dismounted troops in theater combines two separate sensors into one form factor. The first sensor is a low-frequency electromagnetic induction sensor which excels at finding metallic targets. The second sensor is a ground-penetrating radar sensor which excels at finding disturbances under the soil, but it has trouble distinguishing different types of disturbances; for example, the difference between a rock and a metal target.”

The researchers’ high-frequency electromagnetic induction sensor bridges the gap between these two sensing modalities and enables the handheld sensor to find very thin metallic objects like wires, less conducting targets like carbon rods from D cell batteries, and voids in the soil that could indicate a nonconductive IED, such as an ammonium nitrate fuel oil IED.