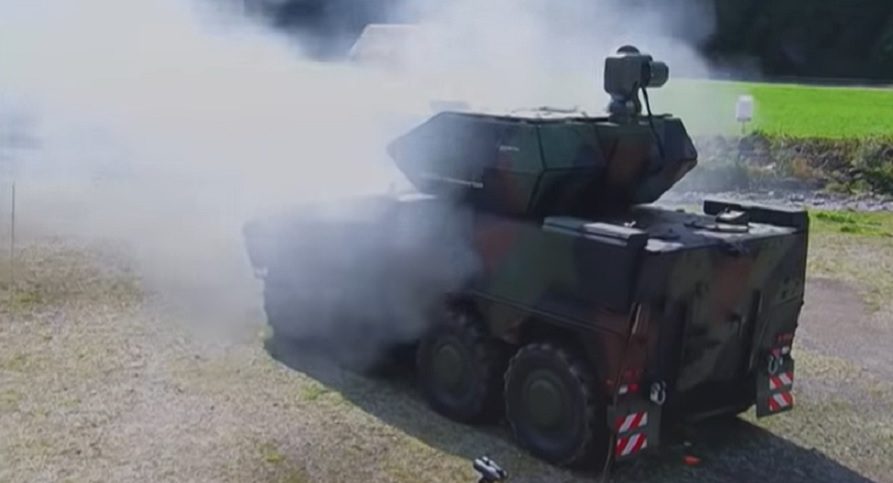 Due to their size and low airspeed, small Unmanned Aerial Systems (UAS) are often difficult to detect at low altitudes while being economical for irregular forces in roles such as reconnaissance and combat purposes. Even if aggressive UAS can be detected, effective systems are not always available for their neutralisation as individual weapon systems can be overwhelmed if more than a handful of targets are involved.

At a recent press conference in Bonn, Rheinmetall explained what the BOXER SKYRANGER, with its 35mm cannon, can do to close the capability gap. It is a mobile ground based air defence (GBAD) system which can be deployed against air targets at short and very short range and against ground targets.

For target reconnaissance, the SKYRANGER is equipped with a search radar, complemented by electro-optical sensors. The sensor mix enables reliable detection and identification of enemy UAS as a prerequisite for target tracking and ultimately neutralisation. The airburst ammunition of the 35mm cannon generates a salvo of 12 rounds creating a large airspace with sub-projectiles that reliably bring down a UAS.

The SKYRANGER, which was presented to the public as early as 2018, has ammunition for a total of 20 salvos on board. Gun and radar are all-weather capable for permanent 360-degree protection.

Integrated into the full spectrum ground-based air defence system, the SKYRANGER could supplement the sensor and effector mix in a capability gap and make an important contribution to mobile zonal protection, according to euro-sd.com.

Counter-UAV Technologies Demonstrated Successfully in Collaboration with US Army