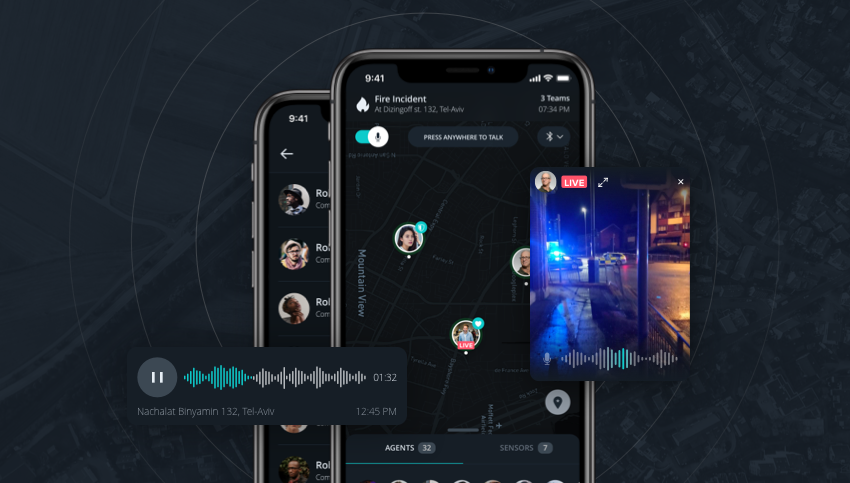 In emergency situations, whether it is a mass school shooting attack or a search for survivors following an earthquake, every second has critical consequences, and the difference between a swift response and a delayed reaction could be a matter of life and death. One of the major causes for the delayed response to an emergency is the quality of communications between the person who needs help and the first responder teams, as well as the control center that manages the emergency situation.

GlobeKeeper, an Israeli company, has identified this problem and the critical need for swift and comprehensive response in emergency situations following harsh incidents such as the Mount Carmel forest fire in 2010. The company realized that a mismanaged emergency situation might quickly deteriorate into a crisis and that it has the means to prevent it. For this purpose, the company developed Connect – a unique platform for swift response, designed to provide real-time response to security incidents during operations in the field, with the help of its VCP Virtual Command Platform.

This groundbreaking solution, which the company started developing five years ago, has so far responded to more than 4000 emergency situations, providing help to more than 20,000 people all over the world. The platform improves the efficiency and effectiveness of emergency response and security operations by 60% while cutting costs and protecting human lives.

How does the technology work?

The current communication devices serving the teams in the field, which are required to an immediate first response, usually have many deficiencies regarding reception range, lack of encryption, and insufficient capabilities, because these are mainly simple push-to-talk devices that do not feature video interface, geolocation, etc.

The Connect platform leverages the capabilities of available mobile devices, such as a mobile phone, tablet, laptop – transforming them into secure, shared devices available for detection and monitoring – all this through a simple user interface.

Connect enables the response teams to collaborate in real-time and communicate with each other by leveraging video, audio, push-to-talk, file-sharing, chat, and external integrations capabilities to derive actionable insights and data-driven security.

Connect provides secure and decentralized communications (that do not require access to servers or stable infrastructure) in real-time. It enables collaboration between all the players: The Command Center, First Responders, and Residents.

The platform also leverages another source that characterizes modern emergency response: Crowdsourced information. Through the platform, citizens using their regular smartphones, can call, send photos or video streams directly from the incident location, and the valuable information is immediately transferred to the security forces dealing with the incident.

VCP – Virtual Command Platform dispatches all the relevant information to the security forces and provides emergency teams with operational and mission-critical solutions for increased efficiency and levels of service.

The technology provides solutions in several fields of operation:

The innovative company was founded in San Francisco back in 2016 by Dan Peleg, CEO, and Shai Slobodov, CTO, who leveraged their military experience in communication engineering in the IDF Military Intelligence Directorate.

Dan Peleg described one of the exceptional accomplishments of the innovative technology:  “18 months ago, our platform was integrated into a neighborhood in Capetown, South Africa, where crime levels and frequency were extremely high, and the residents were afraid to leave their homes. Thanks to the deployment of our system, the crime level in this neighborhood decreased by 95% within just several months.” He added: “Following the successful and thorough deployment in Capetown, our vision is to decrease crime all over the globe by the same rate, and turn the world into a more secure and pleasant place without causing any harm to civilians.”

GlobeKeeper’s solution has already become a world-leading, groundbreaking technology in the security and communications for Security Forces in real-time. It is destined to contribute to the improvement of personal and community security in each and every point on the globe where it is operated.”