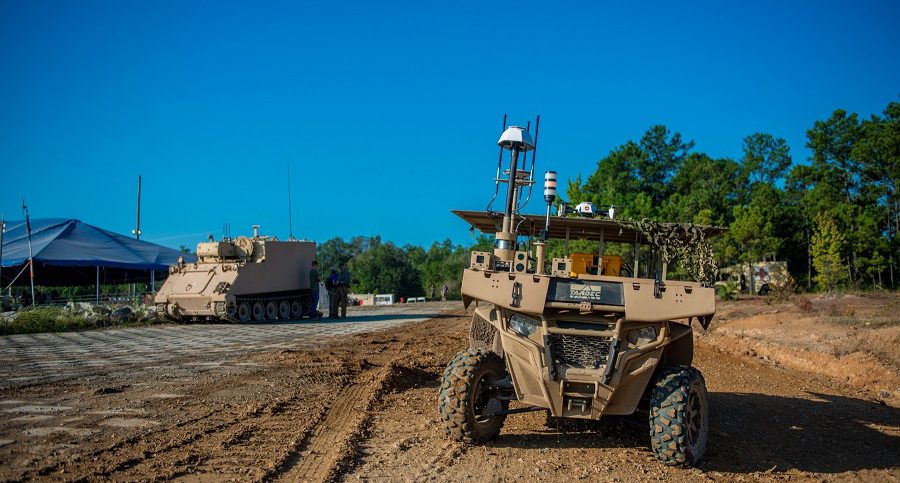 Unmanned systems reinforce troops while reducing the risk to forces. A simulation involving an infantry platoon reinforced with drones and ground robots was recently conducted by the US Army at the Fort Benning’s Maneuver Battle Lab.

The manned-unmanned teaming simulation was based, among other technologies, on the Army’s OneSAF software – a computer-generated forces simulation that provides entity-level models and behaviors that are both semi-automated and fully automated applications designed to achieve Army readiness.

As a cross-domain simulation, OneSAF supports the training, test and evaluation, analysis, intelligence, acquisition and experimentation communities by providing the latest physics-based modeling and data collection, and reporting capabilities. OneSAF models real-world representations of platforms, Soldiers, equipment, logistical supplies, communications systems and networks, emerging threats, and aviation assets to achieve the level of fidelity required for a particular application or scenario, according to peostri.army.mil.

“After about the second or third run with all the advanced systems, the human players were able to coordinate the air and ground robots in a single synchronized assault,” Army Capt. Philip Belanger, a Ranger Regiment and Stryker Brigade veteran told breakingdefense.com.

Artificial intelligence is playing a major role in such simulations. Each individual drone and ground robot needs its own narrow AI to navigate over terrain, analyze data from its sensors, and communicate with the rest of the force. But the most important AI is an overarching artificial intelligence to coordinate the whole platoon – an AI that doesn’t reside in any one physical location, but exists in a wireless cloud.

Instead of a single, central supercomputer that could be blown up, hacked, or have its communications jammed, the coordinating intelligence is distributed across multiple mini-servers carried by robotic vehicles and, potentially, individual soldiers. If one server is destroyed or loses communications, there are still others on the platoon network.

Still, battlefield networks have to overcome problems no commercial system faces, such as rivals’ extensive arsenal of electronic warfare systems to detect and jam transmissions.

It remains to see how all these technologies would work in the real world.