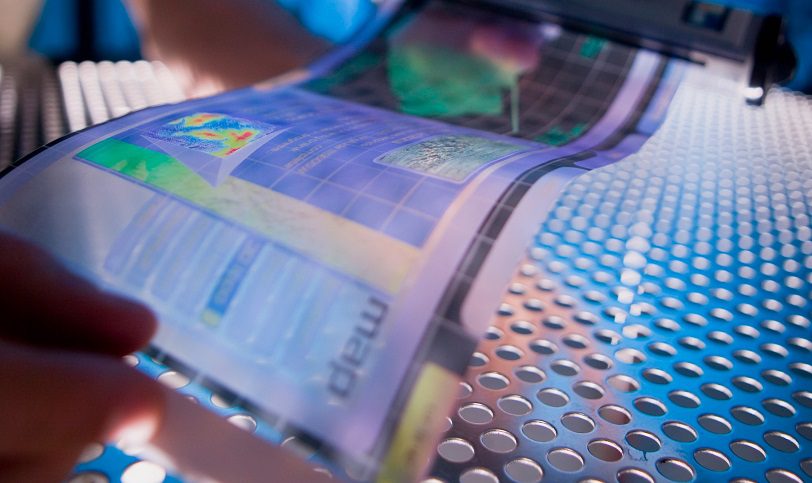 In recent years, the U.S. military has invested heavily in research in different types of brain and computer interfaces. A new technology will revolutionize the way humans convert their thoughts into a machine-readable format, useful for military purposes.

Brain-computer interfaces are sensors that pick up brain signals and electronics that convert them to digital information that can be read by computers. Current technologies for picking up the brain’s electromagnetic signals via electroencephalography, or EEG, are too bulky and are poorly suited for soldiers.

A group of scientists has created an unobtrusive brain-computer interface strip that affixes to the upper neck, performing the data collection of a traditional EEG cap. The signals are then interpreted by software — aided by machine learning — to produce data that could be used to steer vehicles or operate other computers.

The development is enabled by flexible scalp electronics and deep learning algorithm.

“We demonstrated that this portable, flexible wearable system can control an electric wheelchair, mini-car, and a software-presentation” Woon-Hong Yeo, a researcher of the Georgia Institute of Technology, told defenseone.com.

The SKINTRONICS system was designed for people who have lost mobility, but its advantages over the EEG cap promise to give it much wider applicability. “Yes, obviously this system can be used for controlling other devices including military equipment,” he said.

In 2015, the Defense Advanced Research Projects Agency, or DARPA, revealed that a woman with a surgically implanted chip had piloted a virtual F-35. Last September, they showed that a person outfitted with the same chip could steer a virtual assortment of drones.

Beyond brain-based piloting, the military is exploring the use of brain-computer interfaces for communication. In 2008, the U.S. Army gave $4 million to researchers at the University of California, Irvine to study what the researchers described as “synthetic telepathy.” A person wearing an EEG cap or in a magnetoencephalographic chamber would attempt to trick their brain into sending out electronic signals in a form that could be read as communication — in fact, Morse code.

All of these efforts, plus emerging work to treat PTSD via specialized brain-based therapies, could benefit from an interface that, according to the paper, outperforms traditional EEG caps and is less intrusive.

The research findings were published by the journal Nature Machine Intelligence.