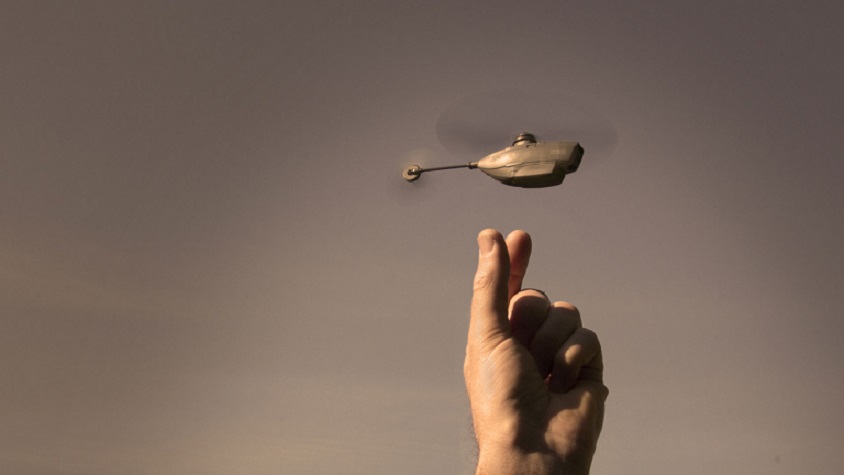 A stealth Micro UAV has been showcased for the first time. The companies Desert Wolf and FLIR have brought the Black Hornet micro unmanned aerial vehicle (UAV) to South Africa, where it is being demonstrated to potential customers, including the South African Police Service, Special Forces and State Security Agency.

Desert Wolf’s Hennie Kieser told defenceWeb he is confident the South African Police Service will order the Black Hornet as it is ideal for flying over crowds since if it falls there is very little risk to people – the UAV weighs just 18 grams.

Desert Wolf has the license to market the PD-100 Black Hornet 2 in South Africa as Desert Wolf is FLIR’s agent and representative in Southern Africa.

The pocket-sized and hand launched UAV uses FLIR’s Lepton micro thermal camera, visible spectrum cameras, and proprietary software for flight control, stabilization, and communications. FLIR describes the Black Hornet UAV as one of the lightest, stealthiest, and safest UAVs on the market, and ideal for military forces and special operations forces.

The Black Hornet helicopter can fly for up to 25 minutes at line-of-sight distances of up to one mile at speeds of 18 km/h. It uses GPS navigation or visual navigation via video and can fly pre-planned routes via its autopilot.

The complete UAV system comprises two helicopters, a base station, controller, display unit and pouch weighting a total of 1.3 kg. It comes in day and night versions, distinguished by the grey and black colours. The grey day version has a day camera while the black night version has a small FLIR infrared camera. An encrypted data link sends information back to the operator.

Because the Black Hornet is currently controlled by Norwegian export restrictions, it is at the moment only available in South Africa and Algeria but Norway will consider other potential export customers. In the future, exports may be regulated by the United States, as FLIR is an American company.

FLIR is present in some 80 countries around the world, including in Africa. David Pernas, a Director in FLIR Africa, told defenceWeb that the majority of FLIR system on the continent are airborne or border security solutions, with a lot of interest in border protection.

One of its flagship projects is along the Suez Canal, with tower-mounted cameras monitoring the waterway for the last 8-9 years.

One of FLIR’s recent contracts has seen the Nigerian Air Force fit an infrared camera on one of its King Airs, and this has been used to monitor Boko Haram at long ranges without the aircraft being detected from the ground.

Major Step on Way to Drone Flights Over Europe’s Cities