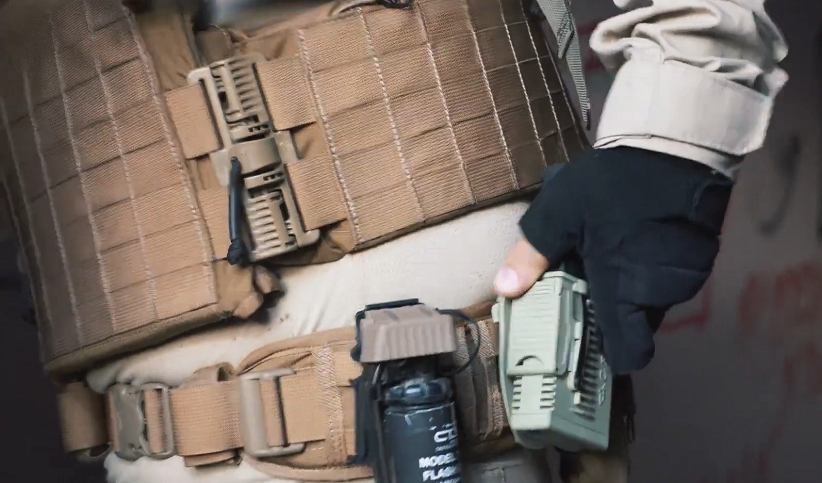 An Israeli company is now working to increase a soldier’s effectiveness and lethality by saving the soldier a few seconds whenever operating and throwing a grenade.

ACS Industries distributes and sells a unique grenade holster that allows for safe storage of the weapon and quick deployment of it too.

The Trigger Pouch is an innovative holster that allows for quick, one-handed operation of hand grenades. The pouch incorporates seven different security mechanisms which make it one of the safer holsters on the market.

Developed over the course of three years alongside the Israeli SWAT unit, YAMMAM, today all YAMMAM operatives are deployed with Trigger Pouches.

The Trigger Pouch is a mechanical holster that utilizes several different mechanisms in order to quickly and safely extract and unpin grenades, all with one hand. The pouch allows for quick action and is compatible with many different kinds of grenades, whether it be flashbang, fragmentation, smoke, or tear gas.

The pouch offers several advantages compared to traditional grenade holsters. Traditional holsters require the soldier to use both hands to remove and operate the grenade, leaving the soldier with neither hands on his rifle and his head down. The Trigger Pouch cuts grenade operating time from approximately 7 seconds, with traditional grenade pouches, to less than two seconds. Since the Trigger Pouch allows for quick, one handed grenade extraction, operatives can keep one hand on their rifle and their eyes on the threat as they extract and throw grenades.

The company makes Trigger Pouches for both left handed and right handed operatives and is manufactured with the same material used in the Israeli Tavor rifles.

ACS also develops pouches for magazines and pepper spray canisters. The company’s website also claims that its products have already reached international markets and is used by several countries including Israel, the United States, France, Germany, Japan, and more.

For details and registration visit http://innotech.i-hls.com/.

US Army Pistols Get New Accessories