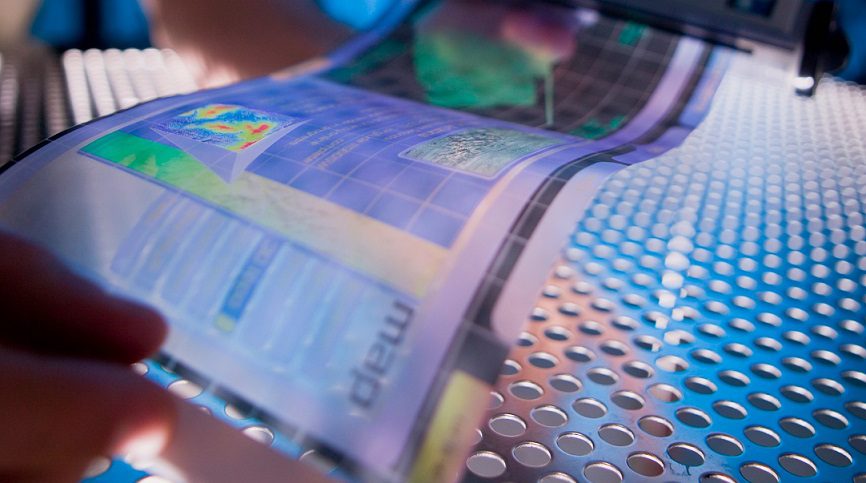 Soft robotics currently in testing is getting momentum in the robotics field. The flexible hybrid electronics are miniaturized, ultra-thin electronics printed onto flexible fabric. The US military sees potential here for everything from lightweight drones to wearable health monitors to exoskeletons for combat troops.

Soft robotics —  either on their own or in combination with rigid exoskeletons — may be the next revolution in soldier protection and augmentation. This trend comes after the Special Operations Command abandoned its TALOS project to build Iron Man-style powered armor.

In a recent innovation day jointly funded by private sector members and the Pentagon, military and commercial applications were demonstrated.

Military applications included the development by Georgia Tech and Lockheed Martin of a soft exoskeleton to boost soldiers’ lower-body strength, without the heavy and inflexible frame of traditional rigid exoskeletons. About two dozen prototypes will be built over the next year, according to breakingdefense.com.

In essence, the soft exoskeleton looks like a high-tech leg brace. It’s actually an array of tiny sensors, 3D-printed onto wearable materials like neoprene and spandex, and inflatable tubes that inflate and deflate on command. When sensors detect the wearer’s leg muscles are about to contract they let high-pressure air into the tubes designed to work with that group of muscles. The system will help US troops to carry heavy gear, e.g. body armor, weapons, ammo, water bottles, radios, night vision goggles, spare batteries, etc.

While soft robotics can act like extra muscle, helping the wearer carry a load — only rigid exoskeletons can act like bone, actually holding up the load and transferring its weight off the wearer to the ground.

Perhaps the most powerful synergy between hard and soft lies in the control systems. Rigid exoskeletons rely on what’s called kinematic control. Basically, as soon as the wearer’s muscles start moving, they push and pull on the exoskeleton, which detects the movement and starts up its own actuators to move in tandem. The problem with this approach is there is always going to be a lag — a period when the wearer has started moving but the exoskeleton hasn’t yet.

A technology called electromyography (EMG) can pick up these signals that come from the muscles before a force is generated. It’s only about a tenth-of-a-second beforehand — 100 milliseconds. But that’s enough time for the soft exoskeleton’s software to calculate which muscle is about to move and how much, and then order the actuators to move at the same time and to the same degree.

Commercial applications are abundant, especially in the medical field. Those include wearable bio-monitors to track everything from hydration to stress to how well injuries are healing. They’re also developing a disposable temperature sensor you can stick on a package to make sure blood samples or pharmaceuticals inside don’t get too warm in transit.