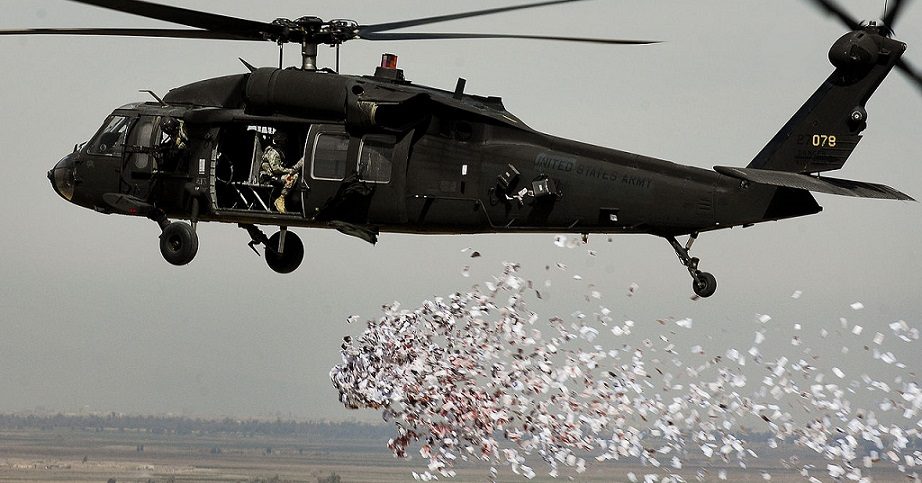 Breaking the will of an enemy has always been one of the most important goals of warfare. One of the techniques many armies have relied on was dropping leaflets on the enemy from the air. A new technology that is going to revolutionize propaganda leaflets consists of a piece of paper, about the thickness of four ordinary sheets, infused with microcircuits that can store and replay a 30-second message.

In May, U.S. Special Operations Forces Command (SOCOM) announced the need for a “printable electronics incorporating ‘flexible micro-circuitry’, [a] flexible speaker, and super thin photovoltaic batteries.” SOCOM has developed a prototype; now they’re looking for companies to improve it enough for combat evaluations as soon as year’s end.

Ryan Brown, an acquisition official with SOCOM, said the prototype has a writable area of about 4 by 6 inches. Now he’s looking to make it better and cheaper. “One of the downsides of making something new… the first-time articles and prototypes are expensive,” Brown said.

One of the advantages of these talking leaflets is that they’ll be able to carry messages to enemy troops that are unable to read, as well as potentially collect information on the people who pick them up, according to outerplaces.com.

The requirement for the electronic talking paper is that the paper should be printable “in the field [to be] deployed or scattered across designated areas to broadcast information as well as provide feedback to assist in MISO planning and analysis.” MISO is Military Information Support Operations, the special ops group that focuses on psychological operations.

Various printable electronic concepts have been around for close to a decade. But the advent of new techniques to mass-produce graphene — a carbon-based nanomaterial that’s clear, highly bendable, five times as strong as steel and an excellent conductor of electricity — has made it much easier to shrink electronic circuits and embed them into fabric or other bendable materials, according to defenseone.com.

Future versions of the material may host a biometric identifier, perhaps allowing only the intended recipient of the message to access it, but that wasn’t part of the prototype or the present industry outreach.

Next Revolution in Soldier Protection