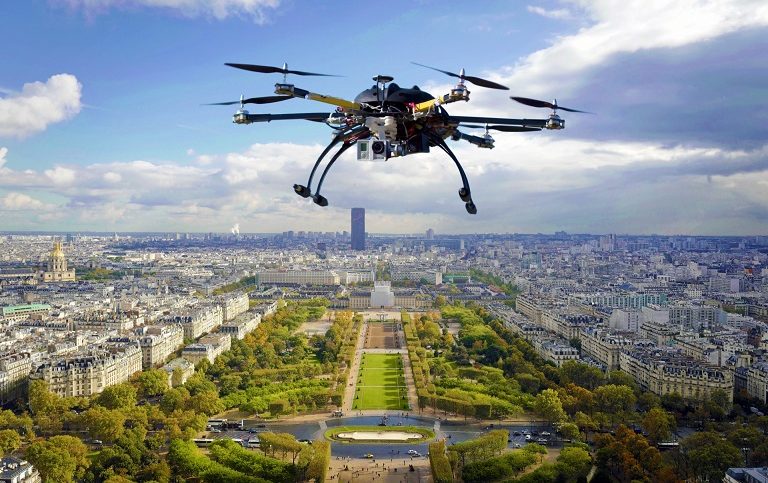 A report by Israel’s State Comptroller published yesterday, November 15th, reflects unpreparedness and considerable shortcomings regarding drone threats in Israel. The reports refers to both threats originating from cross-border terrorism and from unregulated domestic use.

Regarding the external threat, the report claims that the Israeli Air Force still doesn’t have a complete response to address the drone threat. The Air Force Intelligence 2017 assessment said that drones have become part of the battlefield, and supply their operators with various capabilities, and that the drone field “has been in the midst of a technological leap and a rapid growth, which would make it an integral part of the battlefield. The high availability and accessibility of this weapon and the technological advance in the world and in this region would turn it into a considerable element in the enemy’s force buildup”.

Despite of this situation, claims the report, the IAF still hasn’t got a complete response, and processes of building and activating force in this field were still not confirmed nor taken into account in the budget.

As the IDF evaluates the drone threat as a developing, unique and worrying threat, and in the lack of sufficient countermeasures, there is a growing risk that the use of drones by the enemy would not have a proper response.

According to the report, the IDF has been accelerating the development process of further operational response to the threat in collaboration with all the defense agencies. The IAF has been coordinating its work with the defense industries in order to refrain from parallel efforts and budgets.

The IDF even emphasized in its response to the Comptroller’s work that “IDF response should take into consideration the complete State point of view, emphasizing the synchronization of civilian, military and other defense organizations. The response to the drones could also serve as a basis for strategic collaborations.”

The report recommends that the IDF completes the command work regarding external drone threats as soon as possible and will allocate the appropriate resources for advancing the response.

Regarding drones operating in Israel domestically, the Civil Aviation Authority evaluates that their number will reach approximately 20,000 by the end of 2017, due to their lowering price, easy operation, the improving capabilities and their availability.

The large number of drones has many risks. Israel’s small aerial space and its complex defense demands many limitations on the flying of civilian aircrafts, including drones.

In 2016, there were 24 security incidents involving drones, compared to only 14 in the previous year, a 70% increase. Among others, the drones endanger civil aviation, as in a June 2016 incident where a drone was spotted 2.5 km from the route of an aircraft taking off from Ben Gurion Airport. Following the incident, all the aircraft traffic had to be shifted to another route until the area was screened.

According to the report, the national responsibility to the domestic drone threat has not yet been regulated, and there is still a lack in defining responsibility and authority. The lack of efficient enforcement of flight rules vis a vis drone operators endangers aviation security.

Security agencies recommended to improve drone regulation, emphasizing the compulsory registration of sports or amateur drones. This would lead to the establishment of a full updated database of the drones operating domestically, enable the identification of drones and their owners and would serve as a complementary tool in coping with the evolving security threat.

The report says that in the US, more than 600,000 drone owners were registered online at the FAA website in 2016, and it was claimed that this lowered the number of incidents at the vicinity of airports and in general.

Israel’s Prime Minister responded to the Comptroller report, saying that the drone issue has been acknowledged and dealt with by Israel, which is one of the world’s pioneers in the field, and that Israel also referred to other countries confronting the same threat.

The use of drones for terrorist attacks also worries the US authorities. A recent bulletin by the Department of Homeland Security (DHS) has warned Americans about the potential threat of terrorists using weaponized drones as possible means to attack commercial aircrafts in America. Terrorists still see “aviation as the crown jewel target,” said former DHS Secretary John Kelly, now the president’s chief of staff.

The National Terrorism Advisory System bulletin is used to give the public and local law enforcement a summary about ongoing and potentially new terror threats, according to abcnews.go.com.

“We continue to face one of the most challenging threat environments since 9/11, as foreign terrorist organizations exploit the internet to inspire, enable or direct individuals already here in the homeland to commit terrorist acts,” reads the bulletin. “The current bulletin introduces unmanned aircraft systems as potential threats and highlights sustained concern regarding threats against commercial aviation and air cargo,” said DHS acting press secretary Tyler Houlton in a statement.

There’s been an “uptick in terrorist interest” in using unmanned aerial systems as weapons in the United States and other western countries, according to a senior DHS official.

Some terrorist groups overseas are using battlefield experiences to pursue new technologies and tactics, such as unmanned aerial systems and chemical agents that could be used outside the conflict zones. Additionally, terrorists continue to target commercial aviation and air cargo, including with concealed explosives, according to the bulletin on dhs website.

The new bulletin also warns of the use of “poisons or toxins,” which the DHS official says there has been increased chatter about in the terror realm.

Information Manipulation Seen by the US as Major Terrorist Threat