home Strategic Sites Airport Security Start-Up: Integration at the Push of a Button

In a world where every organization works with a wealth of data sources – cameras, sensors, organizational processes etc. – there is a growing need for the integration and connection all the systems into a single working platform.

The company, which participates in the iHLS Security Accelerator, was founded in 2011 by Oren Feldmann, CEO and owner. As veterans of Israel’s security services, he and his team recognized the need that a variety of systems would communicate with each other, vis a vis the gap in the field at the homeland security command and control market – and later in the evolving IoT market – between large-scale multi-billion dollar deployments, and small solutions used by individuals and small-to-medium businesses.

The company’s Chairman will be Giora Ailend, Maj. Gen. (ret.) in the IDF and a former head of the Israeli National Security Council.

EnsuraC&C’s innovative product is a software that identifies the systems installed at the customer’s communications networks and integrates them. According to Gali Golan, Director of Marketing and Communications in the company, their software advantage lies in the fact that it is the first out of the box product that solves the integration problem between products and systems. The product significantly shortens the schedule and lowers the price of the complex integration process. The product is constantly updated vis a vis new protocols and devices in the market, thus preserving its swift integration capabilities.

The company’s unique concept makes systems communicate in a smart way, for example – that the identification of a certain person by the camera will cause various operational systems in the compound to react (turn on the air condition system, open the door) or alternatively to close the entrance and not let him in. 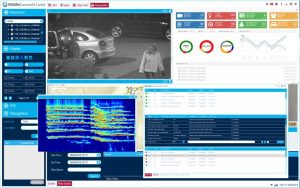 The company turns any city into a Smart City by integrating new and existing systems into an IoT center that connects all the city’s information and management systems, enabling authorities to identify and respond to security and operative challenges. A smart city project in Singapore, for example, included smart solutions for tracking unauthorized vehicles.

This approach has proven itself again and again, with giants such as Amdocs, HP, Intel, and others adopting EnsuraC&C as their Smart City & IoT partner.

Among the company’s major projects are the management of the security and access control of the Katmandu international airport in Nepal, a system that had proved its efficiency during the harsh earthquake, when the system continued to work and streamed the required data on real time.

EnsuraC&C’s system also manages the security array of a federal prison network in Mexico, including, for example, sensors that track seismic changes in order to identify fleeing attempts.

The company’s products manage the connectivity of all the systems in one of Europe’s ports and manages a smart access control and service array at the Dutch Hilton network. Mercedes-Benz’s sale floors in Belgium, the Netherlands and Luxemburg are managed by the company’s smart system. A pilot project is carried out currently in India for the smart coverage of an oil stations network with a unique SAAS protocol, in which EnsuraC&C’s capabilities in combining information and operative systems are supplied to the customer as a cloud-based system service.

The company has been already seeking new horizons. In addition to the software licensing, the company’s business model includes also the next dimension of the information world – the pricing of the data accumulated by the various sensors (e.g. camera recordings).