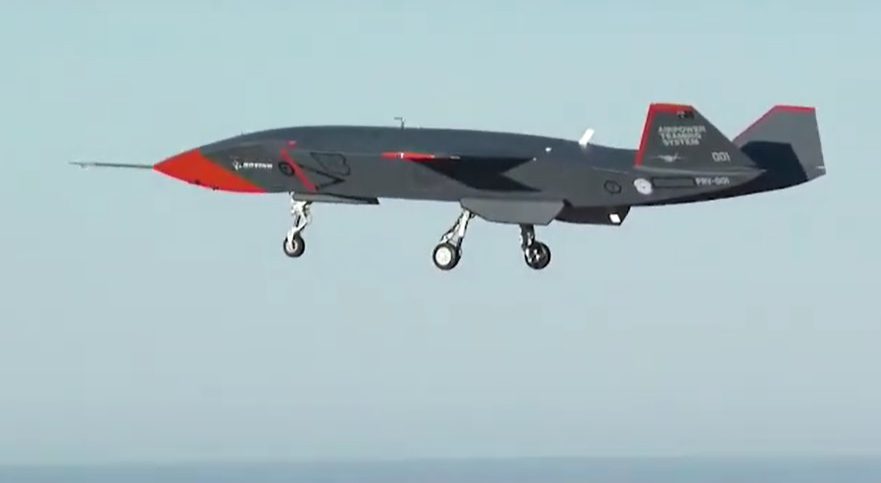 Known as the Airpower Teaming System (ATS), Boeing Australia’s new loyal wingman unmanned aircraft for the Royal Australian Air Force (RAAF) has completed its first flight. ATS is meant to work in combination with the RAAF’s fleet of F/A-18F Super Hornets, EA-18G Growlers, and E-7 Wedgetails, as well as F-35s, acting as loyal wingmen by providing additional offensive and defensive capabilities to these existing combat aircraft.

The ATS, which is a modular design capable of having its entire nose section swapped out quickly, is seen as a landmark program for Australia and the RAAF. It is the first clean-sheet aircraft Boeing has brought to fruition outside the U.S. and the first military aircraft Australia has independently produced in over half a century.

According to thedrive.com, the demand for loyal wingman drones, especially those with low-observable (stealthy) characteristics, is set to explode in the coming years. Pairing loyal wingmen with existing tactical jet types is emerging as a potentially promising and economical way to provide some of the capabilities that would only be offered by far more expensive stealth fighters.

“The Loyal Wingman project is a pathfinder for the integration of autonomous systems and artificial intelligence to create smart human-machine teams,” said the company’s statement. “Through this project we are learning how to integrate these new capabilities to complement and extend air combat and other missions.”

Following a series of taxi tests validating ground handling, navigation and control, and pilot interface, the aircraft completed a successful takeoff under its own power before flying a predetermined route at different speeds and altitudes to verify flight functionality and demonstrate the performance of the Airpower Teaming System design.

With support from more than 35 Australian industry teams and leveraging Boeing’s innovative processes, including model-based engineering techniques, such as a digital twin, the team was able to manufacture the aircraft from design to flight in three years.