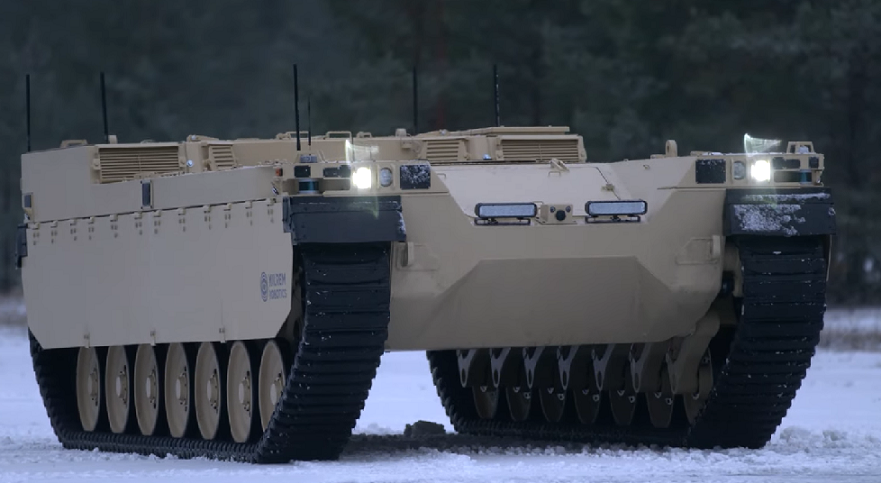 The Type-X manufactured by European company Milrem Robotics will become an intelligent wingman to main battle tanks and infantry fighting vehicles (IFVs) and will be capable of taking on the most dangerous tasks and positions, resulting in lower lethality risks.

According to the company, the vehicle will provide “equal or overmatching firepower and tactical usage to a unit equipped with IFVs. It provides means to breach enemy defensive positions with minimal risk for own troops.”

The Type-X can be fitted with a cannon up to 50 mm. With up to a 30 mm cannon the RCV is airdroppable by transport aircraft such as the C-130J and the KC-390 that can carry one, an A400M that can carry two and a C-17 that can carry five.

The vehicle will be equipped with intelligent functions such as follow-me, waypoint navigation and obstacle detection with Artificial Intelligence being part of the algorithms and will be able to perform remote-controlled operations at higher speeds.

With a weight of 12 tons and efficient power management, the vehicle has superior terrain capabilities. Its height of 2.2 m and a rear engine provide low visual and heat signature.

The Type-X is three to four times lighter and its cost significantly lower than that of a conventional IFV. It has been designed with intelligent predictive maintenance combined with a Health and Usage Monitoring System and Line Replacement Unit principle to ensure a low Through Lifecycle Cost and logistic footprint. Its hybrid powertrain and rubber tracks reduce lifecycle costs significantly.

The Type-X development has been based on the company’s THeMIS Unmanned Ground Vehicle, intended to support dismounted troops, according to the company’s announcement.