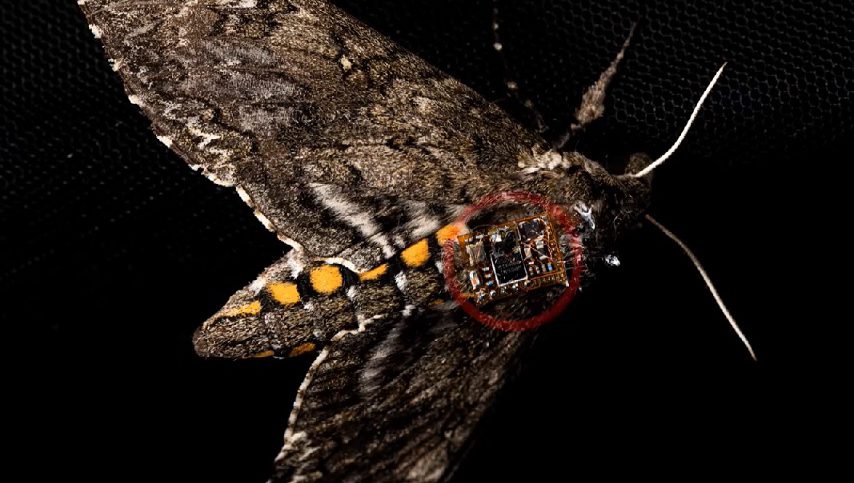 The way military forces drop food and essential supplies from helicopters in disaster zones has inspired scientists, who sought a solution for reaching and exploring dangerous sites, such as scenes of natural disasters, and mapping out the conditions there.

Engineers at the University of Washington have created a tiny sensor system which can be carried to its destination by a small drone or flying insect, before being dropped safely from a great height on the ground.

While industrial-size drones use grips to carry their payloads, this tiny sensor is held using a magnetic pin surrounded by a thin coil of wire. To release the sensor, a command can be sent via Bluetooth to create a current in the coil and generate a magnetic field. This causes the pin to pop out of place and loosen the sensor.

The sensor system is just 98mg: small and light enough to ride on the back of a flying insect.

It was designed such that its heaviest part (the battery) is in one corner. This structure causes it to rotate around this corner (to ‘flutter’) as it falls, generating additional air resistance and limiting its terminal velocity. It can fall 22m (the equivalent of the sixth floor of a building) without breaking. Once on the ground, it can collect data for almost three years.

The researchers demonstrated the system by attaching it to a 28mm-wide drone and a tobacco hawk moth, finding that the sensors suffered no damage upon impact after landing on a tiled floor.

Professor Shyam Gollakota said: “This is the first time anyone has shown that sensors can be released from tiny drones or insects such as moths, which can traverse through narrow spaces better than any drone and sustain much longer flights.”

The researchers suggest that this system could be used to create a network of sensors within a study area, according to eandt.theiet.org.

Drones to Prevent Fraud and Corruption