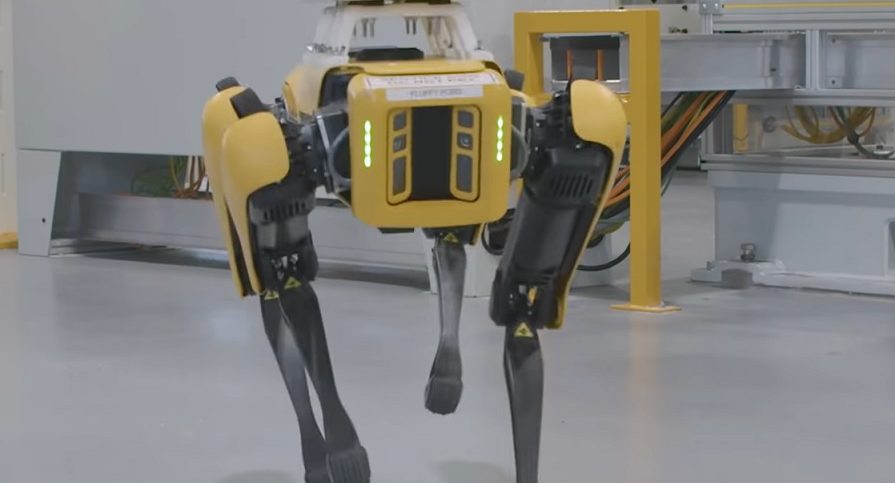 The goal is to automate the process of laser scanning the plant floor, which is then fed into CAD software as engineers prepare to upgrade and retool the plants. This is currently a laborious and expensive mission that takes two weeks per plant and costs almost US$300,000 per plant, but the robots could significantly reduce that figure.

The dog-like robots manufactured by Boston Dynamics are designed for industry, construction, oil and gas, police, public safety or security missions, users can tap into a software development kit (SDK) and tailor their machines to specific applications.

Fitted out with five cameras and a battery providing almost two hours of operating time, the robots will trot around the company’s plant in Michigan at up to 3 mph (4.8 km/h) and perform scans of the facility’s interior.

They will also be transported on the back of a small autonomous robot called Scouter that glides up and down aisles, as a way of conserving energy.

The robots can be programmed to follow specific paths, including moving through tight and dangerous spaces, walking up stairs and over uneven terrain, or handling 30-degree inclines.

Currently they can be operated from 50 meters (164 ft) away, but eventually the idea is that they will be operated remotely, with the ability to be programmed for plant missions from anywhere in the US, according to newatlas.com.

Scanning the facility by robots also provides a digital model reflecting what the facility actually looks like now and enabling to build a new engineering model.