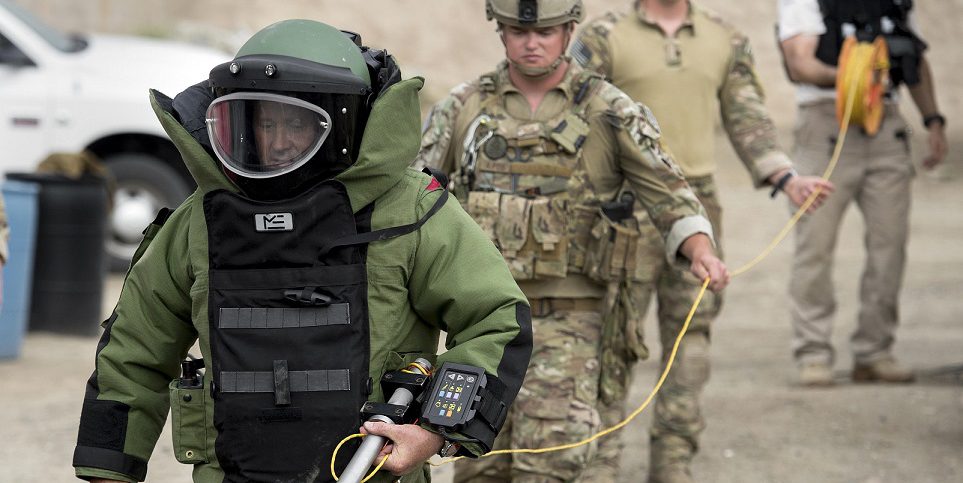 A new water cannon technology helps cope with the threat of improvised explosive devices (IEDs). A versatile tool – Reverse Velocity Jet Tamper (ReVJeT) – breaks apart IEDs by targeting a stream of high-velocity liquid, such as water. It does not detonate the device, but rather disarms it from a distance and allows bomb technicians do their jobs faster, safer, and more effectively. ReVJeT improves upon existing platforms by a conservative 300% and can enhance any propellant-driven disrupter system, making it capable of neutralizing various IEDs.

The project is part of DHS S&T’s Response and Defeat Operations Support (REDOPS) program, which provides a collaborative structure for addressing IED response and defeat capability gaps identified by federal, state, and local bomb technicians, including the National Bomb Squad Commander’s Advisory Board.

“When it comes to firing fluid jets, ReVJeT is the most significant advancement in stabilizing that jet,” says FBI Supervisory Special Agent Dr. Ian Vabnick, who accidentally discovered the technology while testing something else.

The genius behind the technology is that it enhances efficiency by combating a phenomenon in hydrodynamics known as the reverse velocity gradient. Within a water cannon, there are millions of individual molecules of water. As the cannon fires, and a jet of water streams out, the molecules of water move at different speeds. The water in the front does not have as much velocity as the water in back, so its momentum is lower.

The technology was transitioned by the DHS S&T, in partnership with the FBI, to all the state and local bomb squads across the country through the FBI’s Hazardous Device School. The two-year development process yielded the final product delivered directly into the hands of first responders, according to dhs.gov.

The idea resembles a train with the caboose moving faster than the engine. If the conductor hits the brakes, but the back is still moving fast, then the train cars in the middle will all get knocked off the track. That is what happens to a jet of water as it comes out of a cannon. The back end is moving faster than the front and overtakes it. The water in the middle gets pushed out of the way. As a result, the jet breaks itself apart as it travels toward the target, the IED.

“There is an exponential drop-off in performance with distance as you move a disruptor away from a bomb, but not with ReVJeT,” said Vabnick. “There isn’t an exponential drop off because you’ve gotten rid of one of the biggest inefficiencies in the system, which is this reverse velocity gradient phenomenon.”