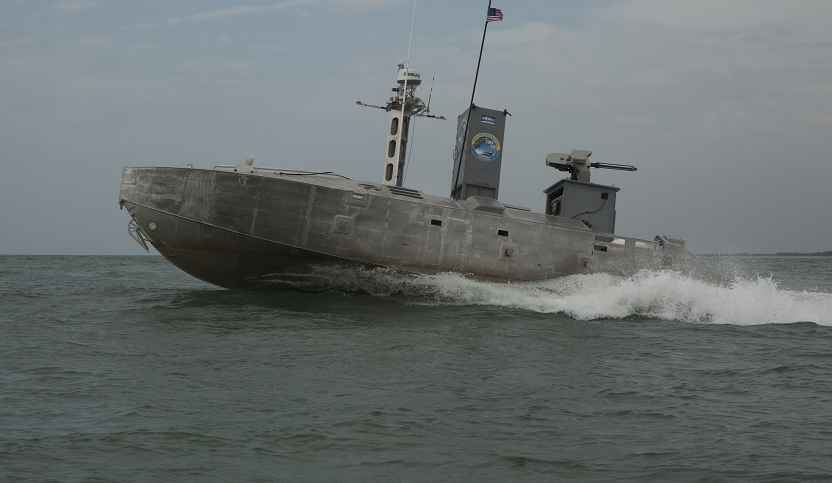 One of the most important, yet least mentioned, missions for the United States Navy, or any Navy for that matter, is port security. Although attacks during peacetime are relatively rare, attacks can happen, such as the 2000 terrorist attack on the USS Cole destroyer in Yemen. To address this potential threat, the United States Navy is testing one of its newest unmanned surface vehicles in order to understand if USVs are an efficient way of protecting docked or refueling warships.

Twenty years ago, the USS Cole was refueling in Yemen when it was attacked by Al Qaeda terrorists. A small boat armed with explosives was sent near the destroyer, there it detonated killing 17 Navy soldiers and injuring 39. The explosions ripped a hole in the destroyer’s hull and cost about $200 million in repairs.

Ever since, the US Navy increased its port security efforts. Now the service is testing the Common Unmanned Surface Vehicle (CUSV) as an autonomous, unmanned vessel capable of protecting larger ships.

Popularmechanics.com reports that the CUSV is modular and can be adapted to take on several different roles. For example, for the port security functions, the CUSV has EO cameras, loudspeakers, and a remote controlled .50 caliber machine gun. Even though the vessel is autonomous, only a human can operate the machine gun.

The Navy has recently tested the CUSV. A simulated intruder was sent near a Navy warship, CUSV operators working from a shipping container have controlled the CUSV to intercept the threat. Navytimes.com reports that the unmanned boat ordered the intruder to leave via its loudspeaker, it then simulated opening fire in order to disable the threat.

The CUSV will one day help keep sailors and soldiers out of harm’s way from potential threats, therefore decreasing the probability of being attacked in the same way as the USS Cole twenty years ago.