home Weapons Biological Weapons What is Military Role in Coping with Coronavirus? 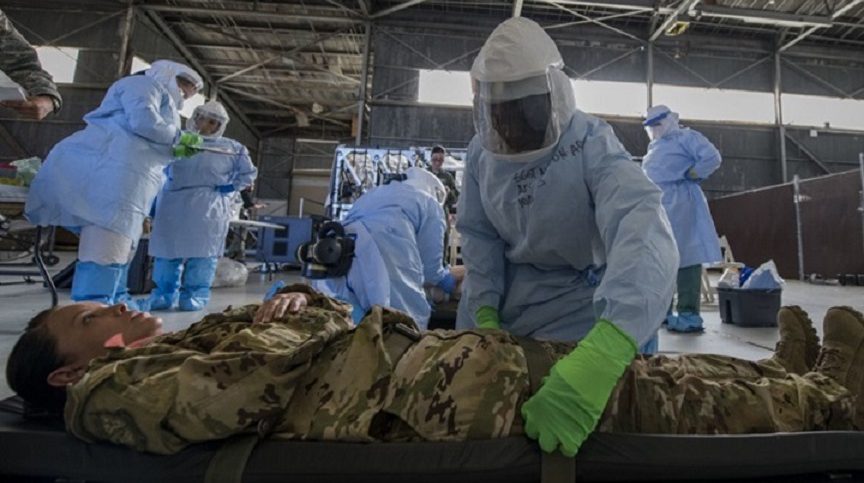 Concerns have been rising regarding the spread of the Coronavirus outside the boundaries of China, and the World Health Organization has already defined the situation as “Public Health Emergency of International Concern.” Alongside preparedness at the civilian level, what is the role of military forces in coping with this peril?

In Israel, the IDF and the Medical Corps are prepared for the possibility of a contamination, according to the IDF website, however, no details were disclosed regarding the role of the military in the preparations. In spite of caution measures, the IDF Radio reported that Asian soldiers have been training with IDF soldiers. IDF Spokesman commented that there was no risk of contagion.

What role is the US military fulfilling with this regard if an outbreak were to occur in the U.S? The military has substantial medical and logistical assets, from hospital ships to heavy lift transport, and the Pentagon can help civilian authorities respond to a medical emergency — both on US soil and abroad.

According to popularmechanics.com, the use of the U.S. military within American borders is a tricky exercise. Due to an aversion to the domestic use of armed troops reaching back to the Revolutionary War, the military can by law only perform certain missions, and is usually prohibited from law enforcement tasks. Other missions, including transportation, search and rescue, and medical support could be undertaken without legal restriction. The Air Force’s C-5M Super Galaxy, C-17 Globemaster III, and C-130J Super Hercules transports can move huge amounts of supplies by air.

The U.S. Army and U.S. Marine Corps also maintain dedicated units designed to operate in chemical, nuclear, radiological, and most importantly biological environments. The Marines’ CBIRF – Chemical Biological Incident Response Force is a battalion-sized unit based at Indian Head, Maryland. The CBIRF is a high readiness force capable of deploying quickly to respond to crises. It can deploy one initial response force of 150 personnel within 24 hours, and the second force within 48 hours.

These are only several aspects of the military role in the likelihood of a contagion in the US.