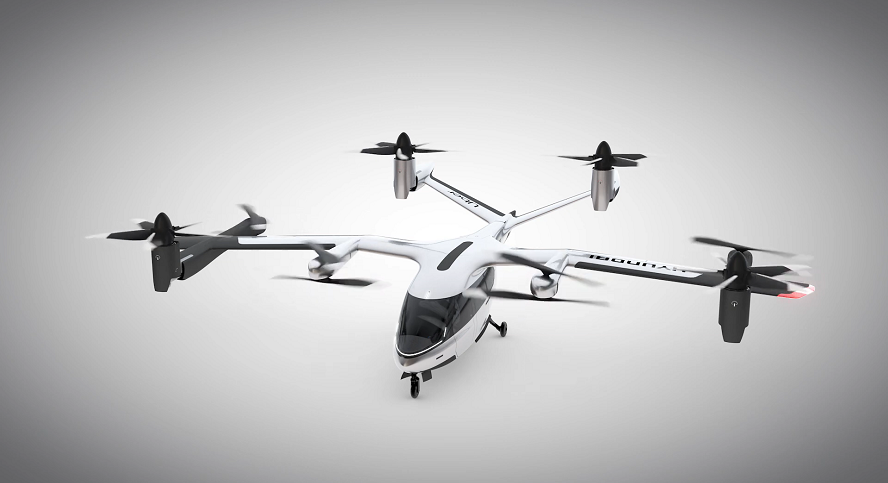 Uber and Hyundai have recently formed a new partnership in an effort to develop Uber Air Taxis for a future aerial ride sharing network. The two companies have recently unveiled a full scale aircraft concept. Hyundai is the first automotive company to partner with Uber for their passenger drone initiative, bringing the tech company full scale automotive manufacturing capabilities.

As part of the partnership, Uber will provide airspace support services, connection to ground transportation, and the ride share network and interface. Hyundai will be responsible mainly for the production and deployment of the aerial vehicle. Both companies will work together on developing the infrastructure to support takeoff and landing for the vehicle.

“Our vision of Urban Air Mobility will transform the concept of urban transportation,” said Jaiwon Shin, head of Hyundai’s Urban Air Mobility (UAM) division. “We are confident that Uber Elevate is the right partner to make this innovative product readily available to as many customers as possible.”

Prior to the announcement of the partnership, Hyundai has worked with Uber to develop a Personal Air Vehicle (PAV) model. The model has been designed to optimize electric vertical takeoff and landing (eVTOL). Uber has taken portions of the vehicle’s design concept from NASA. Historically, NASA has been publicly releasing design concepts to help inspire innovation among companies.

The eVTOL aircraft has been designed to fly at a cruising altitude of around 300-600 meters above the ground at a cruising speed up to 290 kilometers an hour. The 100% electric vehicle will be able to fly trips up to 100 kilometers and will require about five to seven minutes for recharging during peak hours.

The electric aircraft will be powered via multiple, relatively small propellers intended to increase safety and to decrease noise.

Each aircraft will come equipped with four passenger seats, with a little extra room to bring onboard a personal bag.

Uasvision.com reports that the vehicle will be piloted at first, but eventually will transition to become autonomous.

The passenger drone industry is expected to be worth about $1.5 trillion by the year 2040. With competitors from China and Germany working on their own aerial taxi concepts, it is only a matter of time until we see more industry giants joining in on the action.