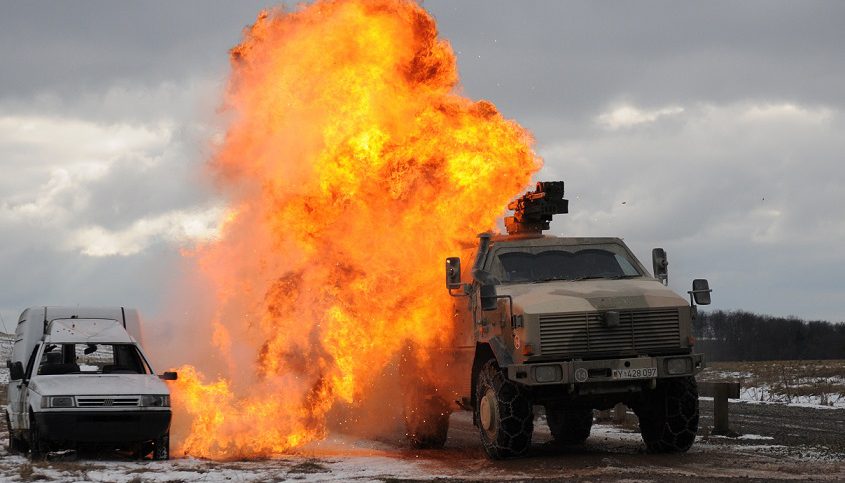 Improvised Explosive Devices (IEDs) can be very difficult for soldiers to detect, as they’re made in a wide variety of shapes and sizes, and are typically buried in the road. They are easy to manufacture and hide, making it the weapon of choice for insurgents and terrorists across the world.

In order to reduce casualties during military transports, frequent surveillance of the high-risk routes is required. One effective method of surveillance is ground-based patrols, who localize potential threats by searching for suspicious patterns in the environment. This is a very demanding task, because humans have difficulties with concentrating on a task for a longer time in an unknown environment. Therefore, an urgent need emerges for a system that can assist military personnel in finding potential threats during driving, according to tue.nl.

A team of researchers developed a new vehicle-mounted system designed to “spot the signs” of IEDs.

The team has developed a real-time early-warning system. When mounted on a military vehicle, it can automatically detect the presence of those bombs by registering suspicious changes in the environment.

The technology incorporates a stereoscopic video camera, a GPS positioning system, and an image-analyzing computer/interface – all of these components would be installed in existing military vehicles. When such a vehicle was out and about, its camera would be trained on the road ahead.

Utilizing the GPS and the image-analysis platform – along with artificial intelligence-based algorithms – real-time images of that road would be compared to previously-recorded images of the same location. If “warning signals” were detected, such as evidence of recent soil disturbances or above-ground triggering devices, the vehicles’ occupants would be alerted to their location through the interactive interface.

Even if the real-time video and the reference video are recorded under different lighting or weather conditions (or from slightly different angles), recent field tests of the technology have shown that it’s able to compensate for such variables, effectively spotting test objects that were placed along a stretch of road, according to newatlas.com.