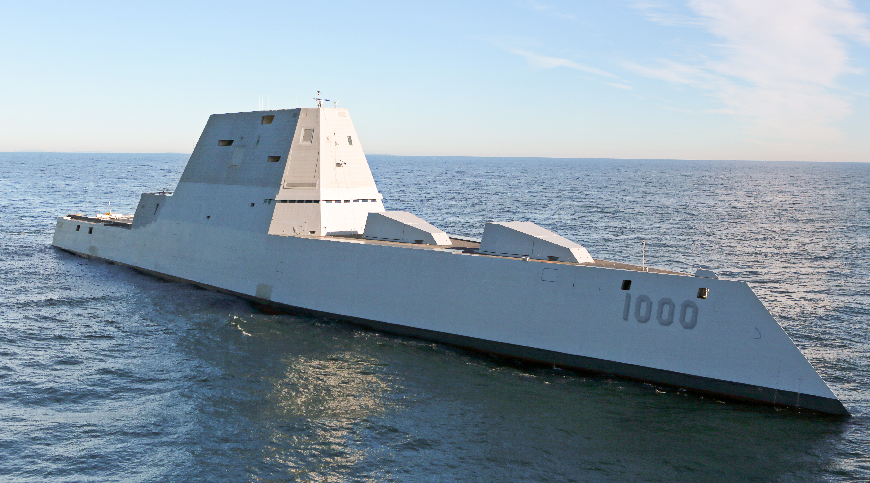 The world’s first stealth warship is running six years behind schedule. The USS Zumwalt, originally developed to provide long range fire support, isn’t expected to be deployed operationally at least until mid 2021. The $7.8 billion dollar project is currently hindered due to the Navy’s struggle finding affordable ammunition to be fired from the ship’s two main heavy guns.

The ship first began construction in 2011 and was commissioned into the United States Navy in 2016. The 600 foot long destroyer has a displacement of 16,000 tons and is designed to have a radar signature nearly identical to a small fishing boat. The stealth ship is armed with two 30 millimeter automatic cannons and 80 missile silos.

The ships main weapons are two 155 millimeter Advanced Gun Systems (AGS). The original plan for the AGS was to fire the Long Range Land Attack Projectile (LRLAP), a GPS guided projectile that can accurately hit targets 80 miles away. The projectiles were originally intended to cost $50,000 each, however due to technical issues and rising costs, the LRLAP projectile’s price rose to over $566,000 each.

Further cost issues also forced the Navy to cut the number of Zumwalts expected to be built from 32 to 3.

Currently the Navy is looking for a replacement round for the AGS. It has also changed the ship’s basic mission from land attack to anti ship. The weapon systems will still be delivered, however in an “inactive state.”

The Zumwalt will only achieve Initial Operating Capability (IOC) around september 2021, this means the ship will be able to carry out at least one of its primary objectives. The ship was originally intended to reach Full Combat Capability, capable of carrying out all its primary objections, in September 2019.

Popularmechanics.com reports that the basic costs of all three Zumwalt ships is $13.2 billion. When development costs are factored in each ship costs about $7.6 billion.