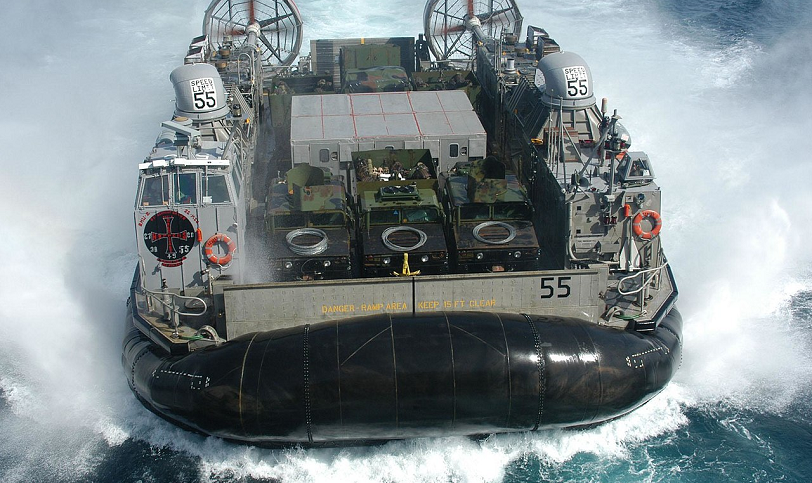 The United States Navy is ready to test its next generation of transport hovercraft. The Navy uses these hovercraft to ferry vehicles and supplies from vessels to land whenever in a hurry. The new Ship to Shore Connector (SSC) will replace the Navy’s older Landing Craft Air Cushion (LCAC) hovercraft.

After World War II and the invention of the atomic bomb the United States military came to the realization that a single bomb could now wipe out an entire fleet. Naval fleets would now have to operate stretched out from each other over a larger area, in order to stay safe and effective.

In order for troops to quickly move from ship to shore the Marine Corps have adopted the use of helicopters. Another solution was the introduction of hovercraft that could depart an amphibious ship ten miles off the coastline and deliver cargo to shore within 15 minutes, according to Popularmechanics.com.

The new SSC is intended to replace the older LCACs that have been with the Navy since the 80s. The SSC is a flat bottomed vehicle with 1,600 square feet of cargo space and propelled by two sets of turbines.

The hovercraft is capable of deployment from a ship into the water and onto the beach. Textron, the hovercraft’s manufacturer, claims that the hovercraft can land on more than 80% of the world’s shorelines.

The SSC can reach speeds of up to 35 knots while carrying over 74 tons, 14 tons more than the older LCAC. The hovercraft can also be fitted to transport up to 180 people.

The entire hovercraft is made of lightweight aluminum in order to resist corrosion and is fitted with four gas turbine engines that deliver a total of 24,640 horsepower.

Navaltoday.com reports that the SSC program will deliver a total of 73 hovercrafts, one for training and testing and the rest being used operationally.