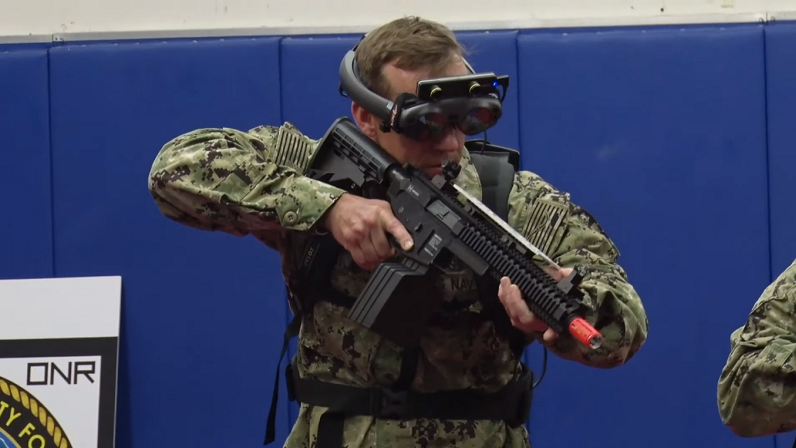 Throughout the past few years, the United States military has been implementing augmented reality as training tools, making it easier for soldiers to train and enhance their tactical skills, decision making skills, and weapons accuracy.

The United States Army has been working with Microsoft to develop IVAS, the Integrated Visual Augmentation System, in an effort to put soldiers in a synthetic training environment. Now, the United States Navy is also experimenting in the AR field with TRACER (Tactically Reconfigurable Artificial Combat Enhanced Reality), the new immersive training system.

TRACER provides realistic training scenarios for soldiers in the form of augmented reality. The system includes advanced movement and weapon tracking capabilities, as well as audio and visual feedback that really puts soldiers in an artificially realistic tactical environment.

AR based training systems offer incredible benefits, especially for naval forces. AR systems require very little space for the training environment, which for sailors is great since there is not much free space onboard naval vessels. TRACER can turn any space into an immersive training environment. This is way more efficient than traditional means of training, that can only be done in approved training areas.

Traditional means of training are also very time consuming compared to AR methods of training. Many soldiers spend a lot of their time training rather than doing their primary job on the ship, AR makes a more efficient use of a sailor’s time.

Soldiers training with TRACER are equipped with headsets and “fake” weapons that provide realistic recoil when fired.

Soldiers that have experienced TRACER’s training environment mention how “it’s almost like going into a different world.” It is possible to scan the world and interact with virtual people that react when telling them to get on the ground.

The military and augmented reality seem to go together. Next.reality.news mentions that aside from the Army’s IVAS and the Navy’s TRACER, the British Royal Navy has also implemented AR technology to allow ship officers to transmit their field of view to other soldiers and officers on a ship.