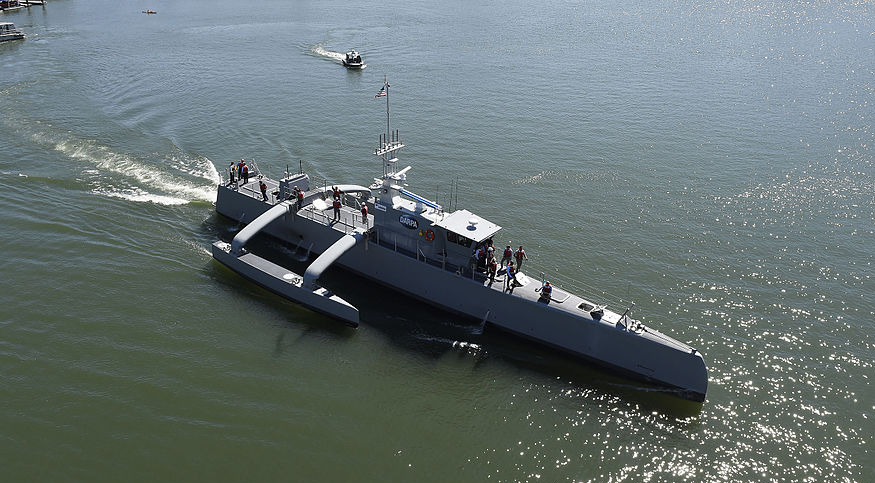 For the first time ever, a 132 foot long ship managed to sail from San Diego to Pearl Harbor and back without any sailors aboard.

Navalnews.com reports that the nearly 5000 mile voyage was completed by an unmanned surface vehicle (USV) called the Sea Hunter. Propelled by two diesel engines that allow the autonomous trimaran to reach speeds of 27 knots and a range of 10,000 nautical miles, the Sea Hunter can stay deployed out in sea for 30-90 days without any supplies. Armed with a generous supply of navigation tools and automated lookouts, the ship is capable of sailing safely near other vessels and in any weather conditions, day or night.

Developed by Leidos, the Sea Hunter has managed to pull off the journey from San Diego to Pearl Harbor and back without any sailors on board to navigate and steer the ship. However, military.com reports that the Sea Hunter, has been boarded briefly by crew members from an escort vessel just to check propulsion and electrical systems.

The Sea Hunter demonstrated to the U.S. Navy that autonomous naval technology is ready to move on from the research and development stages and onto advanced mission testing. Navy officials say that the Sea Hunter, and other autonomous USVs, could completely change the nature of U.S. maritime operations.

Although the Sea Hunter was developed for submarine hunting and counter-mine missions, the idea behind these sort of autonomous vehicles will likely be to focus on the “dull, dirty, or dangerous” mission sets, as mentioned by Dan Brintzinghoffer of Leidos maritime system divisions. The Sea Hunter isn’t intended to replace traditional ships, but to free up personnel aboard to utilize their time for more complex tasks.

Leidos reports that the company was granted a 43 million dollar contract to start construction on a second Sea Hunter. The second Sea Hunter is intended to be an improvement of the original Sea Hunter’s capabilities.