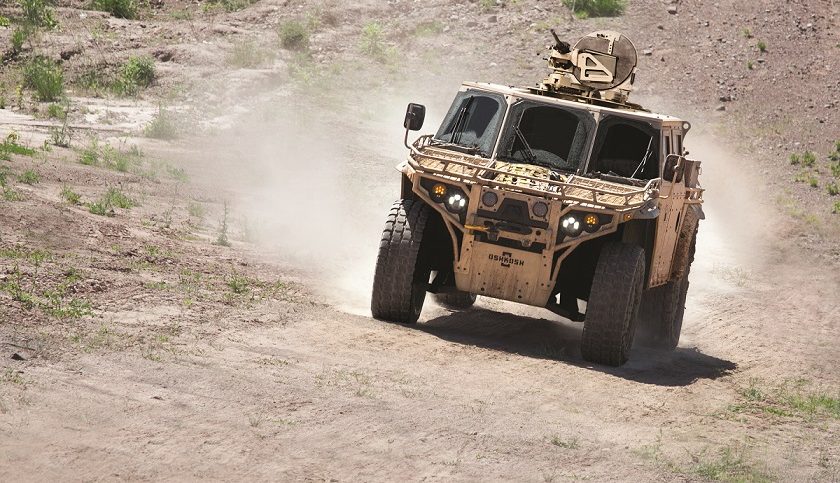 This Special Purposes All-Terrain Vehicle (S-ATV) manufactured by Oshkosh is lightweight and agile, with a modular design to meet a diverse range of mission requirements for armed forces in the United States, Middle East, and around the world. The S-ATV was built to provide the advanced performance needed for special reconnaissance, counterinsurgency operations, long-range surveillance, site seizure and direct combat.

“Building on the success of Oshkosh’s proven off-road military vehicles, the Oshkosh S-ATV is a military-grade platform that is rugged, versatile, and built for speed,” said Mike Ivy, Vice President and General Manager of International Programs, Oshkosh Defense. “With its superior levels of off-road mobility and maneuverability, as well as its ability to disembark aircraft with primary weapons ready to fire in 60 seconds or less, the S-ATV enables Special Forces units to deploy quickly with stealth and agility in the most severe environments.”

The S-ATV comes equipped with the Oshkosh TAK-4i intelligent independent suspension system, providing soldiers with superior maneuverability and a smooth ride. The vehicle can operate in the harshest terrain with a 70 percent off-road profile capability and cruising range of 800 km at 110 kilometers per hour, with a top speed of 145 kph.

The S-ATV is available in multiple configurations with varying protection levels, making the platform easily transportable via both fixed and rotary-wing platforms; it can be carried internally in a CH-47 or externally under either a CH-47 or CH-53.