home Apply to Accelerator An iHLS Startup: Securing Your GPS

A rising number of vital systems in our lives rely on GPS technology – whether it’s police units, airports or even private car navigation systems. However, not many know that it takes very little effort or knowledge to disrupt or jam the system. Besides the fact that it’s an easy thing to do, it happens all the time.  A startup participating at the iHLS Security Accelerator has found the solution.

Mostly, the disrupters are people that don’t want others to know their whereabouts: taxi drivers, employees getting away from their bosses or even individuals trying to stay away from the watchful eye of the government. The problem is that the moment they install a jammer, they create a few hundred meters radius, depending on the jammers quality, in which the signal is jammed as well. A good example for this point is when in 2012 a transit driver in the US installed a jammer in order to hide his location from his boss and created major signal problems throughout Newark’s airport, to which he drove every day as part of his job for two weeks. This trend is getting more and more popular.

“A man can buy a jammer for no more than 20$ and jam a GPS’s signal”, explains Omer Sharar, CEO of GPSdome, a company which has developed a solution for this need precisely. “The solutions in the market today were made in order to protect military vehicles and infrastructure. The problem is that these products are large, heavy and very expensive”.

GPSdome, which is taking part in the iHLS Security Accelerator, developed a product which is about half the size of a smartphone, connects easily to any GPS system with an exterior antenna and at a much lower price, compared to its military peers. However, Sharar explains this is only the beginning: “Our next versions will include more capabilities without enlarging the device: first, we’re going to create a unit that supports GNSS systems (and not only GPS), after that – a product that will be able to defend your signal from multiple jammer and attackers simultaneously”. Despite the long-term targets, the company is building itself step by step. 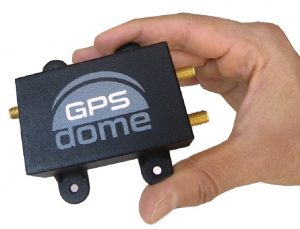 “It was important for us to create the buzz and reveal our development only after we’ve created a functioning device, able to carry out its mission at the highest level and at a price that’s going to make a revolution in our market” said Sharar. It’s hard to argue with the results, GPSdom is successful. The company is currently in a pilot phase with potential customers in autonomous vehicles, drones, infrastructures and other sectors. The company has sold, or is in advanced stages of selling all the units it’s created, and has found out that potential customers that were unlikely to find interest in the product are enthusiastic. While the company’s main audiences were the commercial and private sectors, to help regular people help defend themselves from jammers, an interest has risen from the security sector as well as military organizations that realized that this product is very different from the ones they know in terms of size, weight and power needed, as well as the fact that it’s price is less than 5% of that of existing solutions. To date, the company has raised large sums from private investors and received a confirmation to the Chief Scientist of Israel program at the extent of 4 million shekels, and we are currently looking for a completion to the Chief Scientist program – approximately 2 million shekels. For more details.

The company’s business plan is responsible and carefully planned – surprising, considering the fact that it’s a startup.

The startup today includes CEO Omer Sharar, CTO Moshe Kaplan and Chairman Ehud Sharar. “Moshe and Ehud both have much knowledge; these are key resources for a developing company,” said Omer. Without a doubt these are great advantages when taking into account the fact that the company may succeed in implementing its product in everyday needs for people – be it their vehicle or their smartphone.