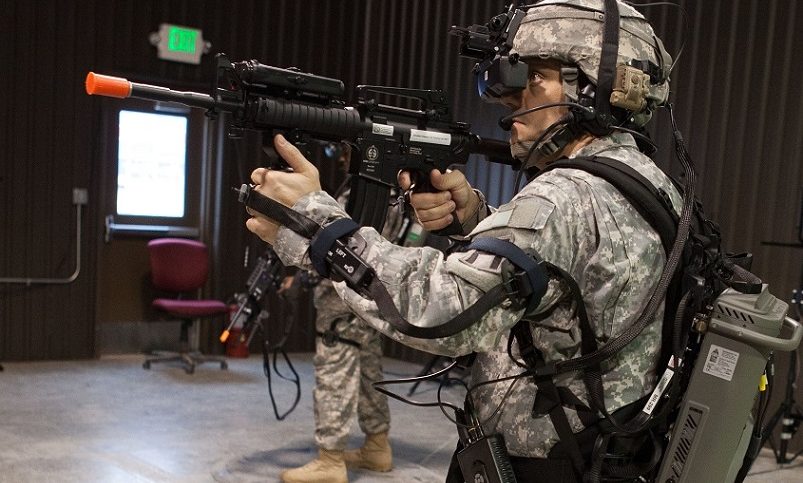 As virtual reality (VR) technology becomes less expensive and delivers a more realistic, immersive experience, some national security experts warn that it is only a matter of time before terrorists use it for recruiting, training and plotting attacks.

The virtual reality marketplace is exploding. Greenlight Insights, a VR research firm, projects that the global market will reach $7.2 billion by year’s end and nearly $75 billion by 2021.

Human-computer interaction researcher Pedro Lopes, a doctoral student at the Hasso Plattner Institute, University of Potsdam, has been using electrical muscle stimulation to allow VR users to feel solid objects, including the weight and resistance of a virtual object they are holding.

Would terrorist groups be tempted to use these technologies? According to afcea.org, there are many plausible scenarios. Terrorists could create a virtual building identical to one they wish to target and use it to plan and train to carry out an attack. “Even building models of things becomes pretty straightforward with some of the techniques. So, for example, as terrorists are trying to scout out and figure out how to conduct an attack, you can certainly see them wanting to use a virtual reality tool,” says Daniel Gerstein, senior policy researcher, the RAND Corporation, a global policy think tank.

Gerstein recalls that when he served as the Homeland Security Department’s acting undersecretary for science and technology, Customs and Border Protection explored using avatars to conduct security interviews. Terrorists could use the same capability for the opposite purpose—passing security interviews, he suggests. “You could easily envision that a terrorist might be interested in getting that same technology and being able to use that to practice doing [security] interviews,” he says.

While there is no evidence yet that terrorist groups are training with VR, the technology’s growing affordability may change that.

On the other hand, David Krum, a computer scientist at the Institute for Creative Technologies, says building VR systems is still a challenge. “Developing an effective training simulation requires deep knowledge of the tasks, the environments and the situations involved. Also, it requires specialized knowledge to turn that into software, a training system and a set of effective training lessons,” Krum notes.

Stewart agrees that terrorists likely will benefit from VR technologies as the systems proliferate, but he indicates that virtual practice will never rival real-world training. “It’s something that can be useful, but there are limits to what you can do with a virtual reality-type activity,” he says. “Putting somebody who is a Navy SEAL operator or a Delta Force operator into a virtual reality environment is different from putting somebody who is a rookie into that same environment. The rookie doesn’t have the skills that come from years of training.” “Virtual reality is a tool that can be effective for training, but it requires knowledge and effort to properly apply.”