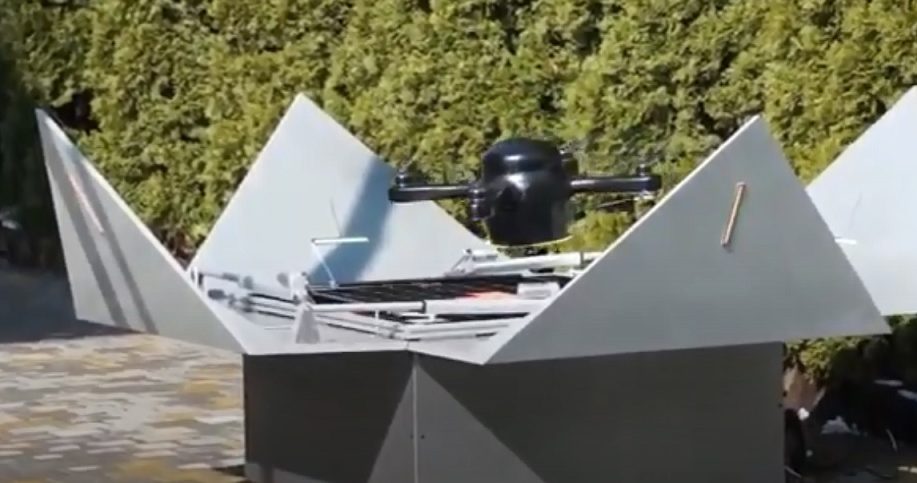 A new fully autonomous unmanned system was successfully tested. The drone system, called the Dronoport, developed by A.Drones from the Ukraine, demonstrated the rapid readiness capability. The system consists of a multi-rotor aerial vehicle and a mobile base station for recharging and sheltering the autonomous drone.

The autonomous system provides storing and controlling the flight of an unmanned aerial vehicle. The drone-port system maintains the required temperature, humidity inside, monitors the surrounding weather conditions and the battery level.

According to the company, the drone is a fully automatic solution, that does not require any operational staff, and is ready to use 24/7 at almost any weather conditions.

The new drone complex signifies the next logical step from remotely controlled and always maintained to fully autonomic. Such systems can fulfill missions such as air pollution control, perimeter security, monitoring of production facilities, prevention of aggressive behavior at events, forest fire protection and others. Fully autonomous drone systems solve tasks themselves according to a predefined algorithm without the help of operators.

Furthermore, the logic of the drone system implies the possibility of integrating separate systems into one network that fulfills one mission. For instance, a number of tactical robotic systems, mounted along a part of the state border, can simultaneously and coordinately control the entire site, according to defence-blog.com.