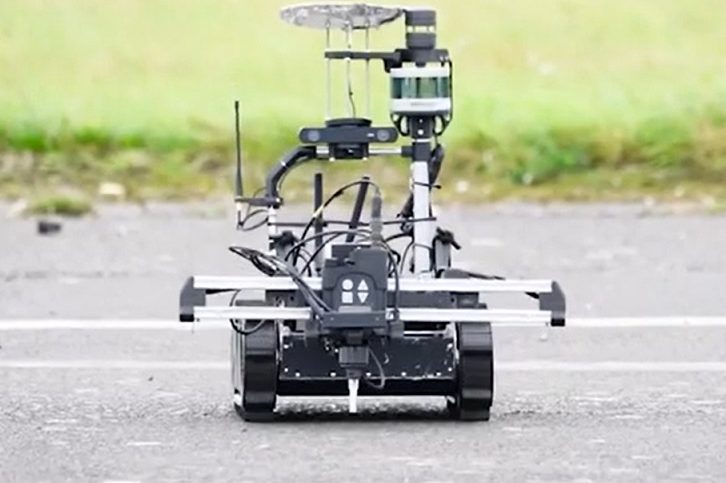 Chemical reconnaissance (recce) on foot and in specially modified vehicles is currently carried out by specialist personnel in the event of suspected or confirmed use of chemical agents, both in the military battlefield and homeland security scenarios. This dangerous and laborious task requires high levels of specialist training.

A fully autonomous robot under development in the UK will help defense and security personnel dealing with hazardous chemicals, lowering the risk to the deployed teams. The technology has significant potential in CBR (chemical, biological, and radiological).

Currently a single prototype, the Merlin robot operated continuously on tasks for several hours with ease. This allowed personnel to monitor and manage the test incident scene from a safe distance, away from potential harm.

The technology was developed in partnership with HORIBA-MIRA with funding from the Ministry of Defense (MoD) and the Home Office.

The trial, run under Dstl’s Project Servitus, follows previous work conducted under Project Minerva, which successfully investigated the use of ground-based and airborne autonomous systems to tackle hazardous scene assessment in areas contaminated with chemical agents, on behalf of the MoD and the Home Office.

Under Servitus, the Merlin robot had an off-the-shelf chemical vapor sensor mounted onto it so that it can be accurately positioned close to the ground.

The trial tested different autonomous behaviors for search and mapping operations in exploring an area, obstacle avoidance, and chemical mapping.

In the trial, non-toxic chemical simulants were sprayed onto the ground within a simulated operational activity. Then, both the military recce teams and the robot undertook the task of searching the areas to find and map the chemicals and plot clean routes.

The soldiers were provided with basic training on the Merlin and its tablet-based human-machine interface and were given the opportunity to operate the robot, set up Merlin missions, monitor progress, and re-task the robot as required.

By the end of the trial, Merlin had successfully demonstrated autonomous operation in area recce tasks that were both clean and contaminated, and had performed tasks to find clean routes through contaminated areas.

The embedded AI was pushed to the limits of object and obstacle recognition and successfully demonstrated its utility within a cluttered environment, according to eandt.theiet.org.