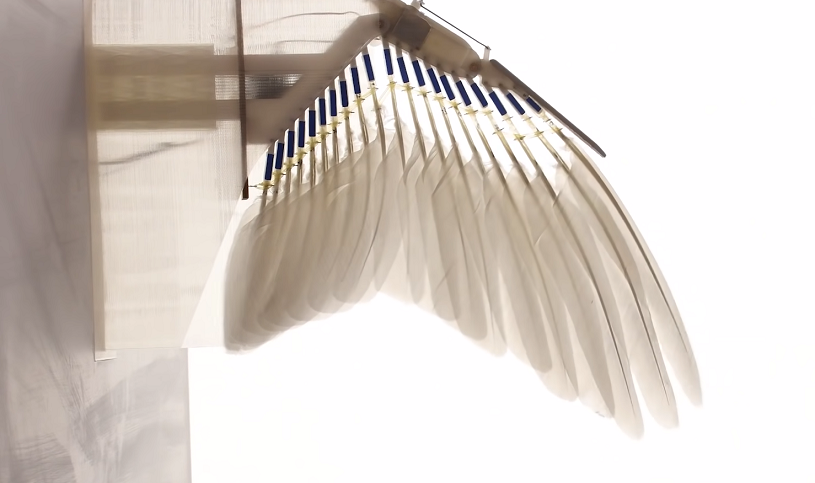 Humans have always been jealous of birds’ ability to fly. It wasn’t until the early 20th century, when the Wright brothers managed to become the first humans to develop a controllable flying machine and begin mankind’s era of flying with the birds.

Humans have known for decades how birds morph the shape of their wings in order to fly, but never truly managed to transform that product of evolution into a mechanical vehicle.

Now, a team of scientists at Stanford University’s Bio-Inspired Research and Design (BIRD) lab are attempting to do just that. The team has turned to study the common pigeon in order to fully understand and implement the physics of a pigeon’s flight.

The team has discovered that pigeons, as well as most other birds, don’t control individual muscles to control their feathers. Instead, with the help of a special ligament, the birds move their muscles in sync, in groups.

This discovery has led the team to build a robotic bird, dubbed PigeonBot, with hopes that one day small aircraft would take advantage of the birds’ natural design.

The team built the PigeonBot using real feathers from a pigeon. The team understood that pigeons control their feathers during flight via wrist and finger movements. Each movement would control the position of the feather and thus control flight.

The PigeonBot has 20 feathers on each wing, connected to a robotic arm connected to elastics that mimic the ligaments in a bird’s wing, according to Popularmechanics.com.

The biohybrid UAV is powered by an electric powered propeller to keep it in the air. The system also utilizes GPS, gyroscopes, barometers, magnetometers, radios, accelerometers, and an autopilot system.

Although even with advanced recreations of a bird’s flying capability such as the PigeonBot, it is not so easy to perfectly recreate the miracle of evolution that has kept birds flying for millions of years. Utilizing a bird’s biology to inspire future aircraft may one day help lower costs and resources needed for maintaining flight. However on the other hand, recreating the complex system of ligaments and wings the bird utilizes on a robot could be dangerous as the more instruments and devices used on the aircraft, the more likely something may go wrong.

The researchers at Stanford have helped push mankind one step closer to seeing truly bird-like aviation.

WATCH: SCAMP, The Robot That Flies, Climbs Walls Like An Insect