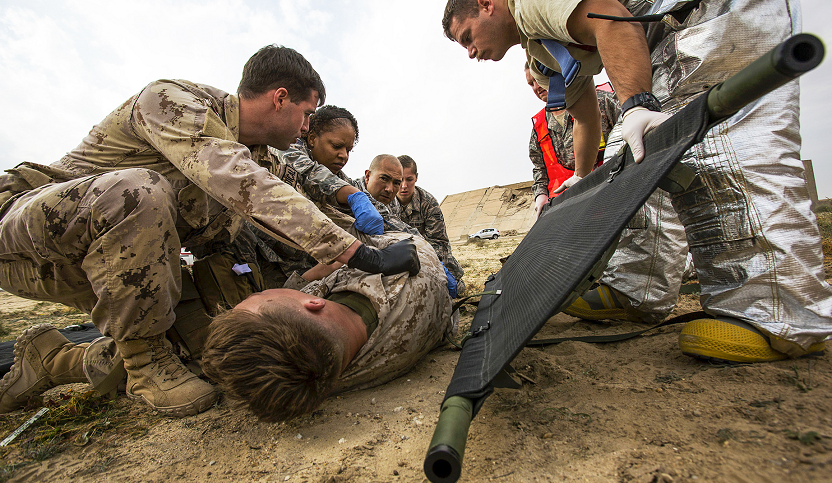 The first 60 minutes after a battlefield injury are considered the most critical period for the injured soldier. In order to optimize that time, in an effort to save lives, the United States Army is working to automate the transition of medical information regarding the injured to hospitals, during the time the injured soldier is being transported there.

Known as MEDHUB (Medical Hands Free Unified Broadcast), the program will make it possible for doctors in the operating room to be better prepared for the patient when he comes in.

Communications today between medevac crews and hospitals are done by simple single channel radio. This is not the most efficient way of communication during a medical emergency since many times hospital staff don’t write down the information accurately and when the medic is reporting to the hospital’s staff via radio what to expect, the medic is talking on the radio and not treating the injured.

MEDHUB exists to solve this problem. MEDHUB automatically transmits patient’s vitals to hospitals, which allows the hospital staff to have a better understanding of wounded soldiers coming in.

The system takes advantage of existing programs and equipment in order to transmit medical data. The system is connected to wireless patient monitors that exist in the medevac vehicle, whether that be a ground vehicle or a helicopter. The monitors then send the patient’s condition, injury, and vitals every two minutes, according to C4isrnet.com.

MEDHUB is also designed so that if any extreme change in the patient’s condition were to occur, the system will automatically transmit the data to the hospital. The automation of this process allows medic to fully treat the injured, since now they don’t need to physically log any vitals or changes to the patient’s condition. Considering that the system is used for military applications, sometimes medics tend to log inaccurate information regarding the injured due to the fog of war, MEDHUB helps get rid of any inaccuracies.

Augmented Reality to Save Lives in the Battlefield