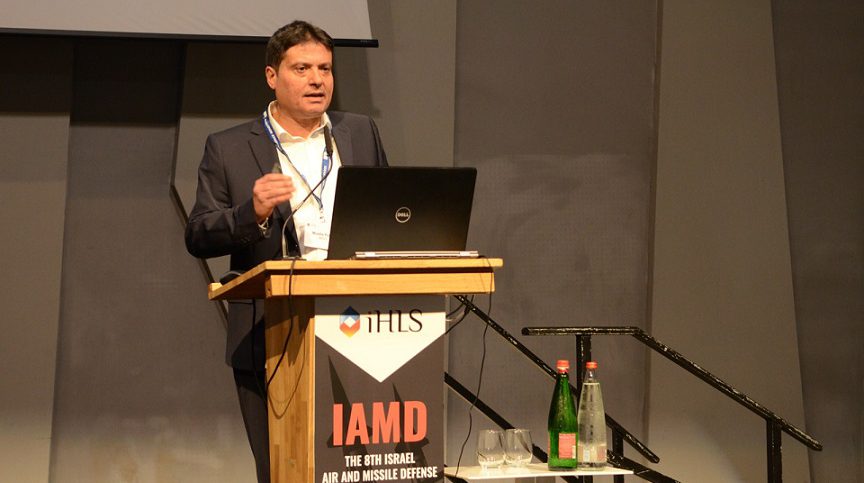 Israel is now threatened by a complex challenge, and the advent of precision weapons is a game-changer. This was the message of the presentation by Moshe Patel, Director, Israel Missile Defense Organization, IMoD, the agency responsible for the development and manufacturing of missile defense systems at the 8th Israel Air and Missile Defense Conference and Exhibition organized by iHLS, IMDA and ISAA on December 2.

“Israel’s missile defense alignment, developed by IMDO, DRDO, has completed an important year of accomplishments and successful moves,” said Patel. “These were demonstrated by the Arrow missile tests in Alaska and in Israel, and the complex tests of David’s Sling system, vis a vis the threats that are appearing in the arena. In addition, major changes were integrated into the Iron Dome array, reflected by the successful interceptions and the defense of the citizens of the State of Israel.”

According to Patel, the Iranians exert influence over the whole region, including organizations such as Hamas and Hizballah. “The high volume of statistical threats on Israel call for a different deployment. The precision level is improving based on very simple means, and the navigation systems now used by the enemies are capable of bringing the munitions to strategic targets, we have to act in accordance with this situation.”

Patel stressed that coping with the wide range of threats, Israel employs a multi-tier defense system which includes different platforms for various types of threats, the systems are interconnected and share information.

The first level is the Iron Dome, which responds to the threat of short-range rocket fire and has proven its effectiveness again and again. Since it started its operational activity, Iron Dome system has executed more than 2000 successful interceptions. Recently, the capability of launching Iron Dome from an Israeli Navy Saar 6 Corvette was added to the arsenal.

According to Patel, there is no global equivalent to Iron Dome, and recently several world customers expressed their interest in the system. He added that Israel receives considerable assistance from the US, and the two countries collaborate in the manufacturing of the system, with more than 75% of it manufactured in the US.

The second defense level, against medium threats with short-range is supplied by David’s Sling system, which became operational in 2017 and is manufactured by Rafael and Raytheon in collaboration.

The third defense level is the Arrow 2 system, a unique weapon with defensive capabilities which features very wide footprint. The system is manufactured in collaboration by IAI/MALAM and Boeing and has been operational since 2000. The system is interoperable with American systems.

The defense against long range threats and nuclear head weapons will be given by Arrow 3, that has entered manufacturing. This system as well is interoperable with various systems.

Patel revealed that during 2019, the Arrow 3 passed a very successful test series in Alaska, including a first interception test with interoperability to American systems. He stressed that the ability to decide where and when to launch the different weapons (selectivity) is crucial when taking into account the volume and intensity of the threats. Patel: “This year’s tests were an amazing success. Three interceptions were executed within 10 days. For the first time, an interception test with American integrated systems was executed.”

Patel also revealed that an Israeli testbed is operative in the US.

He added that interoperability is a very important feature, and this was demonstrated with US ballistic BMDS missiles.

Patel concluded: Missile defense is a critical and central issue for Israel when thinking about the next decade, and it is also based on a real partnership with the US.

Coming Up This Thursday: The Leading Video Analytics Conference & Exhibition

Israeli Radar Systems on Their Way to Czech Republic and NATO