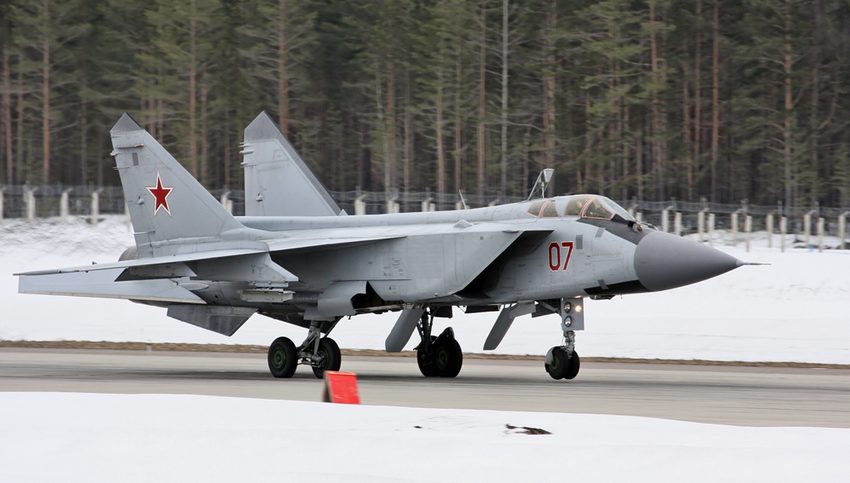 Russia’s Mikoyan MiG-31 Foxhound interceptor was recently spotted with a new, large missile suspended underneath, which could be a Russian anti-satellite weapon.

The missile was spotted at the Gromov Flight Research Institute, near Moscow. The missile could potentially be an anti-satellite weapon, as well as a means of quickly placing small satellites in orbit.

The MiG-31 was photographed by a civilian aircraft spotter, both on the ground and in the air. However, according to nationalinterest.com, the photos drew the ire of the Russian Ministry of Defense, which was not happy that the images made it onto the Internet. Most of the photos were removed at press time.

The missile was previously unseen on the MiG-31 platform. This new combo is reportedly a restart of Russia’s anti-satellite weapon system.

As reported by popularmechanics.com, the original system, known as “Kontakt” (Contact), started in 1984 and involved a MiG-31D and the Fakel 79M6 missile. Later the MiG-31DM paired with the Fakel 95M6 missile. The 79M6 missile was guided by radar from the ground to its target, whereupon it detonated a small warhead.

While the Kontakt system was never tested against a satellite, there have been a number of calls to restart the program since the fall of the Soviet Union.

The United States Air Force tested a similar weapon, the ASM-135 Anti-Satellite Weapon, in 1985. Launched from a modified F-15 Eagle, the weapon was designed to destroy enemy satellites by colliding with them at speeds of roughly 8 kilometers per second. The U.S ran five test shots with one downing a NASA satellite. The program was shut down after that.

Russia’s recent MiG-31 and anti-satellite missile pairing could be the most economical solution to satisfying the needs that might arise during war: the ability to both shoot down enemy satellites and quickly replace own losses.

$15 Tool Will Save Air Force Millions in Labor Costs