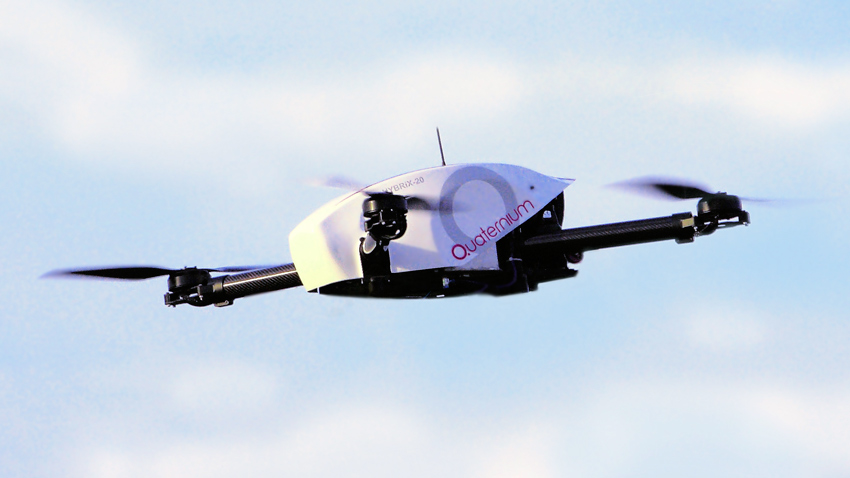 Most commercial multicopter drones boast flight times of 25 to 30 minutes. Now, drone manufacturer Quaternium is claiming a new milestone in this field, after flying its HYBRiX.20 fuel-electric quadcopter for four hours and forty minutes in what it describes as a world record flight for a self-powered multicopter.

As its name may suggest, the HYBRiX.20 multicopter is a hybrid gasoline-electric drone, using the considerable range and endurance this configuration offers for applications like surveillance, mapping, crop-monitoring and inspections.

This long endurance advantage saves refueling/recharging time, and offers a cost-effective operation. Its unique features make HYBRiX.20 a very versatile platform for all kind of aerial applications, and it can incorporate a wide range of sensors and payload accessories, according to quaternium.com.

Custom-built multicopters can fly longer than off the shelf ones. Last year, for example, a commercial drone operator used a bespoke quadcopter to cross the English channel in a 72-minute jaunt, while others such as drone maker Skyfront have previously claimed endurance records well in excess of four hours, according to newatlas.com.

HYBRiX.20 has been developed for easy operation. The removable arms allow for comfortable shipment and deployment. It can be quickly set up and operated by just one person. The system’s ruggedized transport case protects it during the trips to the zone of operation.

How New Toxic Gases Detector Will Save Many Lives

This Detector Does Not Require Extreme Conditions

Who is Behind the Wall?