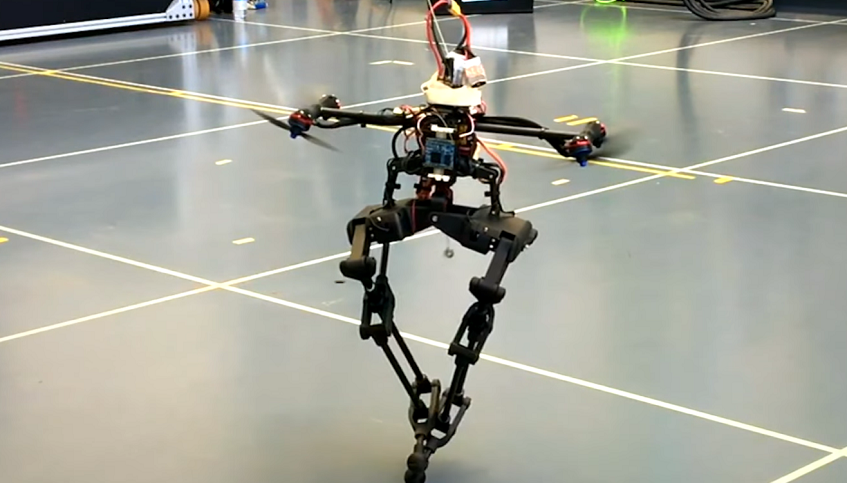 Throughout the past several years, autonomous robots have been shifting from human-like robots that operate on two legs, to more vehicular looking robots, such as UGVs, UAVs, and UUVs. Engineers have realized that developing a robot that rolls on wheels or flies with propellers is much easier to do than develop a robot that balances on two legs and walks upright like a human.

Recently researchers at the California Institute of Technology have made their attempt of merging the two types of robots into one. The researchers have managed to develop a humanoid robot that walks with its legs, but it also utilizes propellers to help stay balanced.

The robot in question is called LEONARDO, short for LEgs ONboARD drOne.

LEONARDO has a set of quadcopter-like propellers instead of arms, making the robot a hybrid between a quadcopter and a bipedal robot.

Although relatively loud, LEONARDO may eventually prove itself to be an incredibly useful asset in military, police, and civilian applications. Since many wheeled robots are extremely limited by the shape of the ground, it is possible we may see robots similar to LEONARDO being deployed alongside soldiers to assist with mission objectives such as electronic warfare, equipment carrying, and even additional firepower for the squads.

Theverge.com mentions that the robot may also be used in the future for exploring and studying Mars.

Currently LEONARDO is still a slow moving robot, but with further research and development it may even be likely that researchers will discover ways to rid LEONARDO of its loud propellor thrusters and have it easily walk upright like a human.